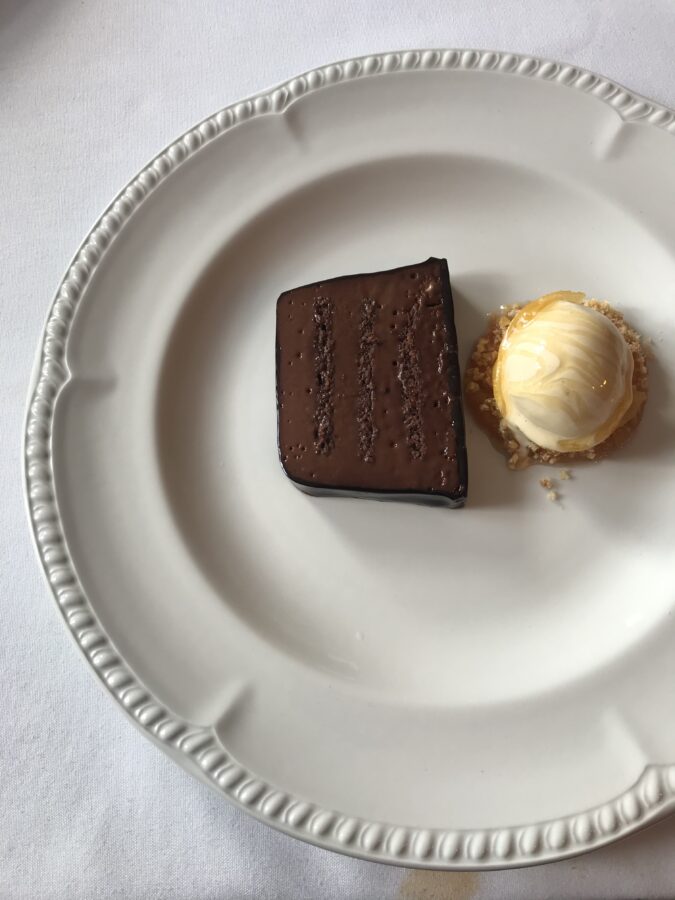 “A good chef is a pied piper, they follow him.” – Marco Pierre White

When a tousled haired Marco Pierre White burned brightly at Harveys restaurant between 1987-1993, the British dining scene shifted on its axis, ushering in a new era and a host of chef acolytes – the influence still reverberates.

I first encountered the cooking of Dom Robinson when he took over The Blackbird pub in 2017, his food swiftly picking up a Michelin star, where he was knocking out classical French cuisine alongside a perfect Sunday roast: I remember being wowed by a dish of foie gras, smoked bacon, coco beans and Sauternes. Another dish that pings in the memory is a seductive mash-up of sea bass with Bombay potatoes and cream of spinach and raita. This was a pub worth a proper trek, worth getting the train to Newbury and cab to the tiny village of Bagnor.

Earlier this year Dom transformed the pub with his wife Marliz, replacing the cosy pub interior into a sleek restaurant space, charcoal-grey chairs and serene pastel walls heralding a gear-shift for this 17th Century pub: a renaissance. It feels like a more fitting environment for the food of a chef who picked up a copy of Marco’s White Heat in a library and never looked back, for the precison and elegance of the plating. The music flickers from the warbles of Édith Piaf to the atmospheric soaring soundscapes of Amélie – there’s no doubting the accent the menu will be speaking.

A tight ‘Menu du Jour’ kicks off with an excellent warm house ‘Baguette Française’ and Normandy butter, leading into a carpaccio of veal ‘blanquette’, daintily plated with wafer thin fried discs of potato, weeny little mushrooms, hazelnuts and a sharp pop of bright acidity from a chardonnay dressing. The first ‘hero’ dish struts onto the table with a swagger, the kind of killer starter that makes me want to fist-bump, high-five and woop woop my dining partner across the table, a plump, silken raviolo of Kennet crayfish with sauce Nantua, a rich cosseting sauce bolstered with crayfish stock, flecked with parsley, an utterly joyful parcel of pasta. I later read that the term à la Nantua is a classic French sauce named after the city of Nantua, famed for its crayfish: Dom calls Renaissant a ‘sauce restaurant’ in his Instagram bio, and during lunch we’re treated to a masterclass in classical saucing.

Halibut ‘Veronique’ gives us the full luxe treatment (a nod to Escoffier’s sole Veronique created in 1898), a beautifully, precisely plated supermodel of a dish, a real looker, a slab of pearly white fish, slices of white grapes, topped with finely shredded fried leeks, with a sauce emboldened by a lick of verjus and vin jaune – as chef informs us – and the gears shift upwards during these main courses: classic dishes resonating with their precedents and history. Saddle and farçi of venison with cardamom and sauce Bigarade is another impeccably presented plate, three silken textured roundels of loin, topped with balls of preternaturally flavoursome carrots, and fiendishly buttery pommes purée; a stuffed cabbage farçi carries the earthy honk of offal, venison liver amongst a filling of pork mince, foie gras and more, a satisfyingly sticky jus (sauce Bigarade being a classic based on bitter oranges) pulling the whole thing together. Marvellously satisfying and ‘unashamedly 1990s’, to use Dom’s own comment on a post of his regimented lines of farçi.

Show stoppers continue into desserts, with a decadent silky mousse of chocolate Negus ‘Nico Ladenis’, a tribute to the first self-taught chef to earn three Michelin stars, and whose influence permeated the best spots of the 1990s, including Marco’s – old school class. We’re charmed also by a Bavarois of malted milk with pears and hazelnuts, a riot of texture, satin and crunch, a weightless little number, dancing with freshness and verve ­– this is the kind of roaring crescendo to round off a meal that has me dashing back pronto, a lightness of touch married to a kapow of cheffy ingenuity.

Even before spotting the original Harveys menu framed on the wall (circa 1992), the DNA and soul of this chef and restaurant is clear, grounded in the likes of Pierre Koffmann, the Roux brothers, and the pantheon and bible of French cuisine Larousse Gastronomique. This is a place to come and be fed well, with a real sheen of luxury, without frippery, with every little detail hitting the mark with obsessive laser-like focus: a rare trick to pull off.

How to sum up Restaurant Renaissant? Joyous, precise, elegant cooking that reverberates in the memory: trés soigné.

*A version of this review first appeared here in Falstaff International.