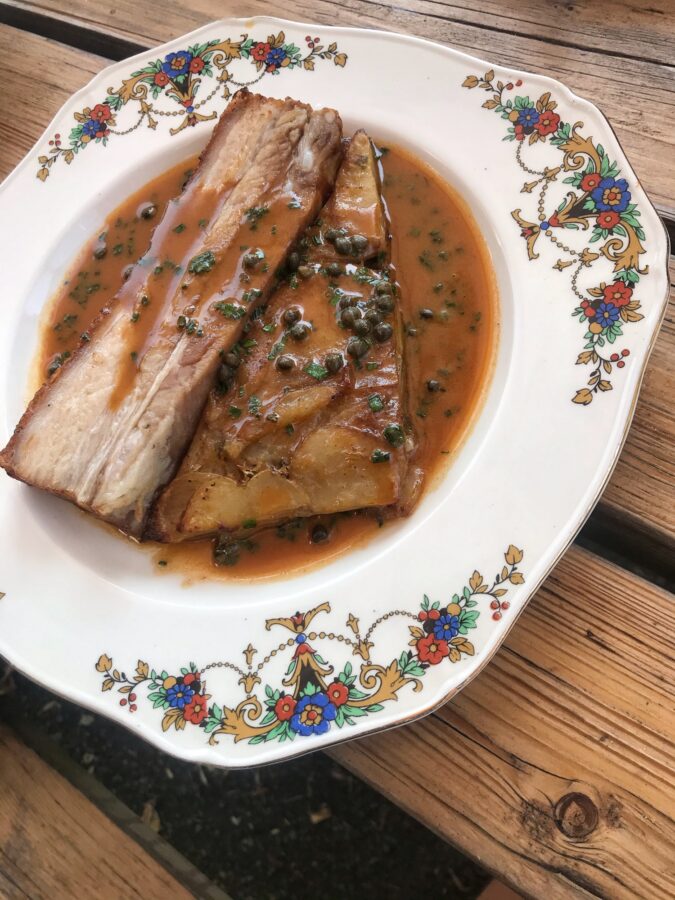 Wickhambreaux was known as Wykeham Brews in 1418. In the Domesday book in 1086 it is mentioned as Wicheham, with a derivation from Anglo Saxon of Wich (coastal trading settlement) and Ham (homestead). Named simply ‘Wickham’ until it came into the possession of William de Breuse and given its ‘breaux’ suffix in 1285, an ancient village oozing with a rich history, it still retains its medieval imprint, with the church of St. Andrew, a rectory, manor house, mill and inn, all clustered around the green. The chalk stream clear waters of the Little Stour meanders alongside the road and under the bridge – it’s an almost impossibly perfect setting.

The manor of Wickhambreaux and The Old Manor House which still stands, was owned by Joan, Countess of Kent, the mother of King Richard II from her marriage to Edward The Black Prince, who distinguished himself at the Battle of Crécy in 1346 at the age of sixteen. Known to history as The Fair Maid of Kent, she held the manor from 1353 to 1386. Historic #swag.

It’s the inn (circa 1302) that brings me here. Originally mentioned as a farmhouse in the Domesday book, one theory for the name of The Rose Inn is that William de Breuse had to pay a token rent of one rose each June to the King; another is that the name is derived from Fair Rosamund Clifford, the beautiful mistress of Henry II, whose grandson is reputed to be the first rector of St. Andrew’s church – the Clifford family owned the manor in the 12th Century, a family descended from Richard, duke of Normandy, father of William the Conqueror. Whichever of these may be true, this little village is shaking more historical moves than most. More #swag. I’m beguiled.

I hear a few rumblings that a chef with pedigree has recently taken over the The Rose Inn as landlord/chef, and dash down on the first weekend of food service – five visits and several long lunches later, I’m convinced that this is a seriously exciting new opening that’s here for the long-haul.

Chef Billy Stock is the reason that this pristinely proportioned village has pinged onto my radar, and with a culinary DNA and CV that is trailing names such as St. John, The Marksman and Rochelle Canteen, the signs are all here – for the keen-eyed, the St. John pig motif is peeking out of the top floor window, a subtle nod to his influences and credo.

Dishes to savour at The Rose Inn

Quail is the first dish we pile into, beautifully grilled, still juicy and oozing its juices onto the plate, beside a resolutely olive-oil heavy aioli (á la St. John), and we’re off to a ripsnorting start. Crab on toast is the unfannied about with, rich smear of brown meat, plenty of black pepper, adorned simply with wedge of lemon. Proper: another St. John flourish, bringing memories back of slain afternoons propped at the bar in Farringdon. Bread is excellent, from  local micro-bakery in the village, Gilda, run by Jon Warren, who barely sells to anyone else yet. Some crumbed lamb ribs follow, dense crunchy fat slabs, with more of that honkingly garlicky aïoli. Solid drinking food.

Barnsley chop is a heroic portion, on top of some well-judged squeaky green beans, alongside some ‘fried potatoes’ that turn out to be the gorgeous cheffiest of examples, the layered cubes inspired by the mandolined paving slabs of ‘potato pavé’. On our next visit these have been finessed, fried cubes with rosti-like strands of squidgy potato innards: even better. He’s good with potatoes, is Billy, along with much else. An excellent caponata with the silkiest muddle of aubergines and peppers, and a supreme summer trifle to finish – we already plan a return before leaving.

A second visit kicks off with fried courgette flowers, with a shatteringly crisp lacy batter, stuffed with goat’s curd and drizzled with honey – batter and frying skills on show. A dish of delicately pickled mackerel, pert slices sitting alongside slivers of kohlrabi and a dollop of crème fraiche – confident, unfussy plating.

That confidence in the kitchen is especially evident with two cold dishes. Home-cured pork collar ham and green bean chutney feels like a brilliant throwback to a dish that could have been served in this pub for centuries, a sharp picallilli-esque turmeric heavy chutney a cracking foil for thick rough hewn slabs of pork. Cold roast beef is another belter, served simply alongside a pickled wedge of fennel and more of that chutney, flavoursome chunky slabs booming with flavour, like the best ever leftovers from the best ever Sunday joint – the ultimate confident strut of cold meat and pickles.

We share braised rabbit with pancetta and broad beans, a fearsomely dark brown stew, a hearty plate cannoning out rich savouriness with every spoonful, thick lardons of pork cocking a snook to airy fairy pancetta, nay, these are fat chunks of belly that the local blacksmith would have appreciated after a day toiling at the forge opposite in 1423. Cod with braised fennel and a perky slurry of parsley and caper-rich green sauce is generous, soothing, joyful, pearly fat flakes falling away to be dredged through sauce.

Returning visits to The Rose Inn

We go back. I could go on about other dishes we have. Of course I’ll go on about other dishes we have. There’s chopped beef on toast, ruby-red tartare cut-through with a lick of Dijon and Worcester sauce, cornichons, capers, shallots and parsley, a muscular starter; deep russet coloured crab soup with serious bosky depth and savour, which am guessing had a slug of booze at some point, whether brandy or some such, lots of sweet white meat bobbing about there too; pork belly with mustard sauce served with a spectacularly good potato cake  (this is more a hybrid of dauphinoise/potato fondant, those potato skills again), scattered with capers and the kind of ‘sauce’ that speaks of long simmered veal bones, a two-day stock pot, a chef’s labour of love. More? Duck offal on romesco, slices of heart and liver, to be mopped up with more of that excellent bread; a Sunday roast pulled off with aplomb, great roast potatoes, buttered cabbage, good chicken coming off the rotisserie – starring carrots that somehow achieved carrotty perfection, something I’ve never said before. This is a chef nailing all the tiny details, every small element, with unerring accuracy, from pitch-perfect seasoning through to judiciously buttered cabbage. This is cooking to get on horseback for.

I’m even charmed by the puddings, despite revelling in my ‘dessert dodger’ tag. Twice we have a frangipane tart, once with apricots, another occasion with cherries that ‘Billy has just taken out of the oven, if you’d like some’ – yes please, we would. Rum baba is airy weightless boozy goodness; salted caramel chocolate tart drops devastatingly silky ganache moves; blackberry Eton Mess makes us grin like loons.

A daily menu shifts tantalisingly on each visit, enticing enough to have me checking every couple of days to see dishes flashing by on the board: braised duck, potatoes and onions; skate, roast tomatoes; caponata on olive toast; deep fried cod and aioli (he has the lacy batter skills, this we know); red mullet, white beans and butter sauce; grey mullet, braised fennel, tomato and green sauce; rotisserie chicken dripping its glory load of fat onto potatoes beneath, from a Rotisol machine looking on to the garden. Hit after hit. When are we next going? I bump into Head Chef of Michelin starred The Fordwich Arms, Kieran Bellerby, on one visit, always a good sign – go where top chefs eat, you’ll be alright.

The Lowdown on The Rose Inn

It’s a true one-man kitchen. No pot wash (its either Billy or waiting staff), and sweet staff they are too: shout-outs to Josh, Anya and Shannon for sparkling, breezy service each time. Shannon even rattles off the process and ingredients for the green bean chutney like an experienced sous chef …because she helped make it. Sun trap garden and a pub that hums each day with the buzz of parents dropping in after the school run, and we find ourselves chit-chatting to locals like we’ve been living here for years. A Free House with Timothy Taylors Landlord on cask, and Kentish Pip from up the road in Bekesbourne. Meat from Chandler and Dunn butchers of Goldstone Farm; vegetables from chef favourites the Wonky Parsnip and Walmestone Growers; Frazzles; homemade pork scratchings; Inglenook fireplace waiting for winter. I later find out the memorable cold roast beef dish is from the pedigree Dexter ’Moomin’ herd that has been grazing on the White Cliffs of Dover. A plate of ox heart and chips from this beef blows the doors off. Kapow. Tick, tick, ticking into perfect pub territory.

More history #swag? Turns out Wickhambreaux is also the location of the site where one of the first Roman roads in Britain crossed the Little Stour river, on the route from where the Romans first landed in Britain and built Richborough Fort near Sandwich. Phew. Here endeth the history lesson.

A timeless village, a bygone era, idyllic setting….and now a chef that has dialled unerringly into all the details that make a pub a true destination for food. This tucked away spot goes straight into my ‘worth moving to the village for’ list. Get thee to Wykeham Brews, and head to The Rose Inn – verily, ‘tis worth the journey.