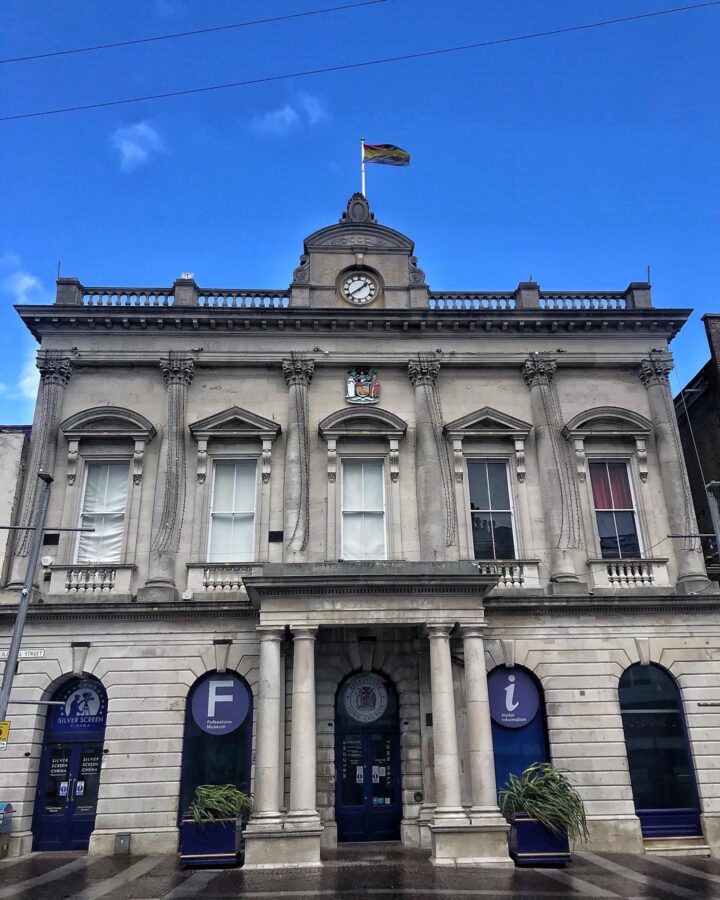 For many of us a first visit to Folkestone will begin with a visit to its beaches, with its shingle and sand shoreline and stunning views across to the White Cliffs of Dover, and on a clear day, to France. However, the town itself has been having something of a renaissance over recent years, and since moving here in 2019, I’ve seen things kick into another gear.

Set amongst 26 miles of Heritage Coast, there’s a rich history to explore. Starting with the name, Folkestone – derived from the Old English ‘stān’ meaning a ‘stone or rock’, a site historically associated as a meeting place for people. ‘Folca’ is thought to be a personal name, so ‘Folca’s stone’, and The Domesday Book records Folkestone as Fulchestan. The first nunnery in Britain was also founded here by Saint Eanswythe in the 7th Century, great granddaughter of Ethelbert, the first king of Kent . St Eanswythe’s Church stands proudly in the heart of Folkestone today.

Back to the present – and Folkestone’s Guildhall Street is a tangible signifier of how I feel the momentum has picked up since the easing of pandemic restrictions. The wide pedestrianised street stretching away from the Guildhall is one of the entry points into town if you’re walking from Folkestone Central station, a swift 53 minutes from St. Pancras International.

There’s a bounce and energy that’s permeating throughout the town. This historic street in the town centre (once the scene of grand flag waving celebrations including Queen Victoria’s Diamond Jubilee and while marking the end of the First World War), is finding its groove again and beginning to fulfil its potential.

The first guildhall was a medieval building used for holding markets on the ground floor with assembly rooms above, and the current Guildhall on a site close to the original is now known as Folkestone Town Hall. Officially opened in 1861, it was designed by Joseph Messenger in the Italianate style and is Grade II listed – it’s an impressively grand building. It now houses the Silver Screen Cinema, a hidden away twin-screen gem, the site of Kent’s first film screenings in 1896.

The Bao Baron’s opening here is a big marker. The fire-cracker of a menu from chef Greig Hughes is the draw, who together with partner Daisy Wooton has created one of the most exciting restaurants in town. Originally starting as pop-up on the Harbour Arm, they quickly gathered a loyal following, continuing as a takeaway during lockdown. A former baker at local Docker Bakery, Greig’s homemade fluffy baos are as good as you’ll find anywhere: Katsu chicken and pickled ginger; beef brisket bulgogi and gochujang mayo; salt and pepper broccoli, roast onion, sesame mayo: all winners. With the permanent restaurant site comes the addition of bowls of ramen, his bouncy homemade noodles adding heft and chew to deeply flavoured broths. From a classic pork belly ramen with bone broth, shio tare and spicy crackling, to the current miso roasted skrei cod with ‘Nduja, these are dishes to soothe and comfort. A smart selection of ‘Xiao Chi’ small snacks are great drinking food, including his rave-worthy Korean Fried Chicken.

The touchpaper has been lit: #GuildhallStreetRising.

Further along the street, the next welcome arrival is Betty’s Pye and Mash, opened by Tony Pye and family and named after his daughter Betty. Pies are freshly baked from London’s Manze’s on Tower Bridge Road, ensuring it’s the real deal. Jellied eels, sausage and mash, and Manze’s own chilli vinegar on the tables – it’s proper stuff, the real experience. The family already have a close connection with Folkestone, having run Chummys fish stall by the harbour for over three decades, and having lunch there on its opening day I’m charmed instantly, sharing a booth with a couple who came especially for the opening from Dover, sharing stories about how they grew up with this food – it’s been an instant hit with queues out the door.

Beginning with the the rejuvenation of the Harbour Arm over recent years, and regeneration across Folkestone, the town centre is now beginning to brim with renewed energy. The ‘dots are being joined’ between some of my favourite spots, starting at the harbour and winding our way up into town from Rocksalt and its gasp-worthy views across to Dover and France, past the colourful shops, galleries and cafes of The Old High Street in the Creative Quarter and up towards Guildhall Street.

A snap-shot of my favourites in this part of town, as we turn right at the top of The Old High Street include: The Potting Shed for speakeasy martinis; The Beer Shop for craft beers; Space Bar and Kitchen for food residencies and wine; Folkestone Wine Company for supreme cooking; Lucky Chip for burgers and vibes; The Pullman pub for fireside drinks; Thong Dee’s for Thai noodles and snacks; Ek Baar for fantastic Indian curries. Then as we head out of the town centre we reach an area affectionately coined ‘Bouverie Village’ with the strip of Bouverie Road West playing host to a clutch of offerings: The Bouverie Tap is a bustling spot with Krombacher German lager, Belgian Trappist beers,  Sunday roasts and great chicken wings; Cocomee with its freewheeling asian menu that dances between Malaysian beef rendang, wasabi prawns, dum sum and Japanese takoyaki fried octopus balls; The Radnor Arms tucked around the corner is a beautiful pub, with cosy wood burners, cracking little sun-trap garden, and a wood-fired oven pumping out pub classics alongside playful bar snacks. It’s a wonderful segue into the sedate and leafy atmosphere of West Folkestone which still retains the town’s Victorian and Edwardian grand architecture.

Folkestone’s food and drink trail is one to have plenty of fun with.

This feature has been created as part of a paid campaign with Folkestone & Hythe District Council, with support of the Welcome Back Fund, a fund that is providing councils across England with a share of £56m from the European Regional Development Fund (ERDF) which supports the safe return to high streets and help build back better from the pandemic.