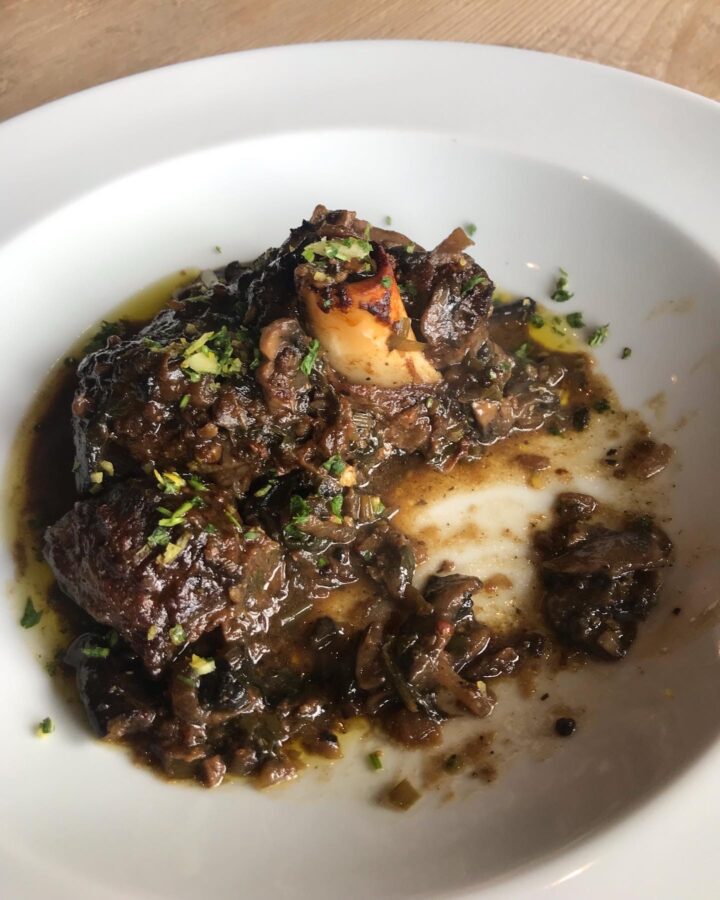 “Bitterballen, bitches” – this was the message I pinged to my Dutch pals on the second visit to The Cove. They knew this was the fruitiest compliment possible for a bar snack that headed up a riotous menu sparking with ‘must-orders’. These fried croquettish gems contained the goodness of wobbly piggy bits, made from porchetta, and a fiery nose-tinglingly pokey mustard. Cracking into these while slinging back pints of Rothaus  German lager is a very good way to start lunch.

When a community pub has been closed for six years, its reopening  is something to be celebrated and cherished by the locals. Taken over and reinvigorated by chef Henry David and Olivia Loveridge, The Cove sits in the picturesque village of Fairlight, a spot which was a gift from William the Conqueror to the first Anglo Norman aristocrats after being crowned king in 1066.

Those ‘Bitterballen’ are a nod to Olivia’s Dutch heritage on her mother’s side, sitting alongside a host of tempting dishes on the chalkboard menu: porchetta toastier; omelette Arnold Bennett; lamb sandwich; pork schnitzel; chicken piccata. I’m pretty devastated on a second visit when the ‘spätzle cacio e pepe’ I’m eyeing up is brutally wiped off the board as I’m about to order at 12.05pm – it was on last night and today is all change. FOMO becomes FFS but it’s ok, there’s plenty more to wade into.

‘Lekker squid’ with sambal mayonnaise and sorrel features bouncy tender squid, delicately battered amidst a tumble of sorrel, to be dredged through that perky mayo, a squeeze of lemon wedge to help things along. It’s the first dish I try here, and it’s a belter. Very lekker indeed, the Dutch pals will be pleased to hear.  Their direct relationship with suppliers comes to the fore with two exceptional wild venison dishes ‘hunted by Arthur in his woods’. The smoked tartare carries the subtlest whisper of smoke, allowing impeccable meat to shine through, studded with capers, alongside pickled cucumber and topped with the yolk of a ‘pullet egg’, small, extra-rich eggs laid by young chickens, usually discarded by farmers.

Dish of the Year at The Cove

Venison ‘Osso Buco’ is a revelation. A majestic plateful, chunks of lovingly slow-cooked meat falling away from the bone, with mushrooms and a zesty grating of gremolata, the bone offering up its nugget of marrow to be slurped through the hole, for those that appreciate the joy of this thrill. It’s a ‘high five’ dish. Straight into ‘Dish of the Year’ territory. The Cove website states that “venison is hunted by Arthur in his woods” – Arthur, I salute you.

Looking at pictures of the former building, it’s clear how much of a transformation this pub has had, seriously gussied up but keeping its essence as a pub that the locals of Fairlight have immediately embraced, propping up the bar and popping in for a ‘Press burger’ or idling away an afternoon over one of their excellent Sunday roasts and a rosewater and black pepper pavlova with strawberries & cream. The garden space outside is a joy too, a sprawling sun-trap.

Come for the bitterballen, stay for Arthur’s venison, return for that spätzle cacio e pepe….it may just make another appearance. Fax me, yeah?

*A version of this review first appeared in print in Falstaff International in June 2022.