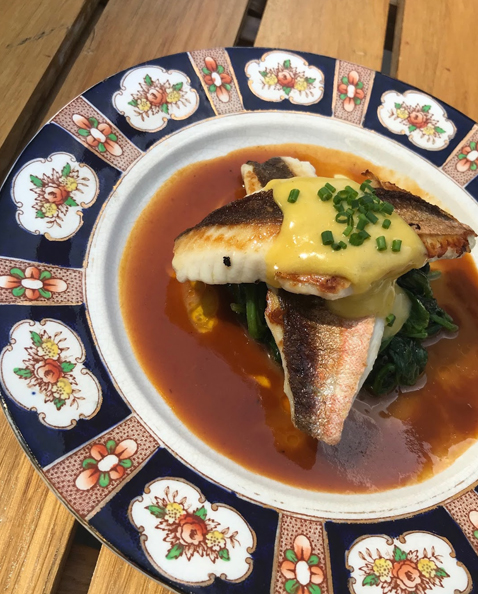 Tubbs peers over his spectacles at me:

“I have a room for you, but I can’t confirm for another ten minutes or so, until I move a few of the rooms around.”

Checking in to The Grand Burstin hotel, a hulking cruise ship shaped edifice overlooking Folkestone harbour – built in 1984 on the site of the 1843 Royal Pavilion Hotel – I have walked inadvertently straight into an episode of The League of Gentlemen: it’s eerie, it’s dark comedy, it’s a quite unexpected way to end the evening.

I’m directed upstairs by lank haired, sweaty browed Tubbs, to Cell Block H-esque corridors of rooms where intersecting doors are marked ‘B-Wing’… £34 a night (£44 with a sea view) and I’m ignoring the surreal details, just grateful for one of the 550 beds, a tad annoyed I’ve missed the cabaret show in the bar that evening: a mental note is made for next time.

It was never meant to be like this. An early dinner, then back on the bullet train back to London – a breathless 47 minutes to Stratford International – was the plan: back in bed for News At 10. When a restaurant experience is that good, making you throw a middle finger in the direction of the last train home, you know you’ve found something special.

From the first meal in December last year, on the very first service, it was already clear this place was a bit good – three more visits and I’m suckered. Would I move to Folkestone, on the basis of one restaurant? Yes. I think I would. Rightmove, I do chortle on reading your admangled lingo on the ads with Find Your Happy polluting tube stations and hoardings, but I may need your help now. Find Me My Happy.

Around the corner from the ‘creative quarter’ and a short stagger up the hill from the harbour, The Folkestone Wine Company  is also handily sited next to – as far as I know after several visits – the best pub in Folkestone, The Pullman. The restaurant is tiny – front of house run solely by Polly, David’s partner, co-owner and daughter of actor Donald Pleasence – 24 seats across two rooms, a bona fide wine cellar and hatch in the middle, and a four seater-bar that calls to mind the vogue for home bars in the 70s: an urge twitches to order a Cinzano while Tony Bennett croons away on the vinyl player.

So, those visits. Wooed on the first by a pearly slab of brill, with leeks, mussels and chive velouté: mop-worthy buttery sauce, bed of leeks, plump and sweet mussels. Then weightless gnocchi, with kale pesto, a poached egg nestled amongst, oozing its yolk into that cloud-like mess at the nudge of the fork. A wedge of potato dauphinoise (we ask for a slice, seeing it featuring on an unordered dish) is a beauty, the Platonic ideal. A lunch features salt cod stuffed piquillo peppers, with a bouillabaisse dressing – silky brandade wrapped in vermilion piquillo, sweet and salty jiving against each other, a happy tussle. This is confident, unfussy, back-of-the-net cooking.

What else? A crab, chicory, clementine, hollandaise combo brings a Sportsman-esque memory into view, a very fine memory of a dish enjoyed in Seasalter. Local skate comes dredged in brown butter and capers. Hart enjoys flying by the seat of his pants in terms of sourcing, ordering fish daily and carefully, so turbot on at lunch will sell out and perhaps brill/skate/John Dory will take its place for dinner. Am almost weeping sea-salty tears on hearing the turbot is already sold out by 1.30pm – having winged it down from Stratford on a whim one Saturday – before being shut right up by a spanking dish of gurnard fillets, topped with a sunburst yellow of quivering aioli, with that heady bouillabaisse sauce speaking of long simmered fish bones and shellfish. Joyful stuff.

Squid ink tarama with crudités, soft boiled egg, is an eye-popper, the empty plate like one of Jackson Pollock’s 50s ‘Black Paintings’, smears and swirls of black tarama left behind, heady with olive oil, squid’s inky cargo to be swept up with bread. Again, this is assured pan shaking, pulled off with a charming insouciance.

Unerring simplicity features on every menu chalked up on the blackboard, from starter bites of Cervelle de Canut, the Lyonnaise cheese and herb dip of fromage frais and herb – like Boursin that went to university and ditched the garlic – silky and cool, a fine foil for their homemade bread. A spring risotto is perfectly timed, a riot of green of courgette, orange of carrot, a cheffy brunoise of finely diced vegetables, deftly seasoned.

The crockery plays a part, antique beauties – I spy Coronation Ware, Barlow and Sons  (Stoke-on-Trent, 1862-1940, I later find out) – small brass pepper pots and salt cellars are cute vintage Harrods jobs. Vinyl plays in the corner, Polly on the decks (she loves requests) a stash of Bennett, Sinatra, Thelonious Monk, classics all. A glass of Westwell  pale pink Ortega grown on the Kentish North Downs, is a discovery, as is a beer from Romney Marsh Brewery, their ‘Cinque Porter’. Wine can be bought to take home. Despite the name (something of a misnomer) this ain’t no wine company – it’s a damn fine restaurant.

“How’s it all going this evening, alright?” – Taking the key, I lock eyes on the wide-eyed stare.

Go to Folkestone for some quietly brilliant, classy, uplifting cooking – it’s the restaurant we’d all love to have around the corner: and that, quite simply, is why I’m moving to Folkestone.  #foundmyhappy