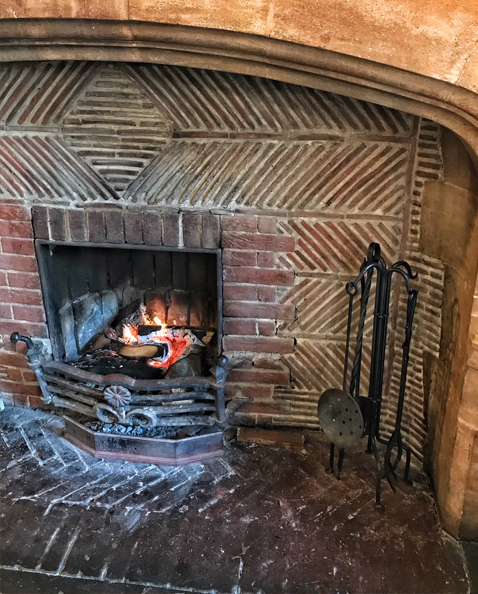 “Unless you want an overpriced fancy dinner, you can now only get fancy overpriced nibbles for a lunch. No more lovely cob rolls. No sandwiches. No jacket potatoes. Now an overpriced wine bar” – Upset Local, TripAdvisor, December 20017.

It’s usually a sign that a pub is doing something right if they’ve managed to enrage some of the commenters on TitAdvisor, a forum inhabited by loonies, nut jobs and self-enraged, frothing head cases.

The League of Gentlemen comes to mind reading the woes of this one, a step away from Royston Vasey-esque questioning: ‘Are you local? This is a local shop for local people, there’s nothing for you here.’  Fancy this, fancy that, overpriced this, and on and on. The rare occasions I dip into this maelstrom of uppity criticisms and belching, leave me bellowing SHADDAP at the screen.

Fordwich is officially Britain’s smallest town, the smallest community by population that has a town council – 381 residents in the 2011 Census – nestled beside the River Stour, two miles from Canterbury. A sign by the tiny bridge over the river states this stat of its titchiness, adding that it’s twinned with Aire Sur La Lys near Calais. During the Middle Ages it acted as the main port for Canterbury, despite being a fair distance inland, with all of the stone for Canterbury Cathedral being landed here by the Normans, for rebuilding in the 12th and 13th centuries. King Henry II granted it a Merchant Gild Charter in 1184, and it’s mentioned as a small burgh in The Domesday Book: it may be teeny, but this bit of Kent throws a fair few historical moves.

The Fordwich Arms is one of two pubs in the village, records showing an inn has stood here for over 900 years. Rebuilt in 1930 after a fire – rather handsomely – it changed hands at the beginning of December 2017, now owned by a young trio of Dan Smith, formerly sous chef at The Clove Club and winner of the Observer Young Chef of the Year 2016, pastry chef Natasha Norton, and another Clove Club alumnus in sommelier Guy Palmer-Brown. No big investors behind them, a first striking out on their own after working in London

The town hall built in 1544 sits opposite, believed to be the oldest and smallest in the UK still in use. Open fires at each end of the bar, good Guinness, sausage rolls on the pub menu: first impressions seduce. Lunch number one sees a table with Stephen Harris, chef/owner of The Sportsman  down the road in Seasalter, chef Tom Kemble of Bonham’s, and another table with chef Paul Weaver of Noble Rot (who gave me the tip-off, and with whom we lunch) – the rule of ‘go where the chefs eat’ is never a shoddy one. We may be in luck.

Warm, freshly baked Fougasse bread to begin, some sturdy soda bread, alongside a fat quenelle of their own excellent butter. House cured and smoked pork belly, diaphanous slices glistening on the board, slices of cured pork loin: all impressive opening salvos – enough to sway the most strident local naysayers, I reckon. Still, some people….

‘From homely to hipster….we should have walked out when we saw the menu.’  – TitAdvisor

Chicken liver and foie gras parfait is a silky beauty, slugs of madeira, brandy, red wine and port in there for a boozy depth charge. Circles of radish on top give it an armadillo coating, gingerbread crumb beneath. Fancy presentation? Maybe. Ruddy good? Yes.

Local trout has been hay smoked, before being given the confit treatment in olive oil. Appearing like countless other bits of fish in those ‘fancy restaurants’, smooshes of this and that, a scatter of horseradish and seaweed powder, what emerges is a nailed on jaw dropper. My notes simply say ‘weightless, ethereal nonsense, woah’.  Smooshes are an emulsion of Whitstable Bay oysters and a sauce made from the grilled bones, reduced with Kentish cider, split with dill oil. Otherworldly texture, that trout. Eldritch moves in the kitchen. Fancy? Nah. £9.

‘I went to the opening for ‘meeting the locals’. The place was packed. As a local I recognised very few of the customers. We locals have kept this pub going for the past innumerable years.’ – TitAdvisor

Local crab (oi, crab, you sure you’re local?)  is adorned with a deft brown crab hollandaise, with pickled cucumbers and sea vegetables. There’s an echo of The Sportsman  crab dish with hollandaise and carrot salad – no bad thing. £9.

Jerusalem artichoke and Canterbury Cobbler tart is all crumble and melt, lasciviously short pastry – a heroic amount of butter – blended with the cheese, ending up as a real highlight of a second visit. A cute surprise. £8.

Stour Valley pheasant dumplings, made with the breast meat, are wrapped in gossamer wonton-esque casings. A mahogany coloured, sonorous consommé made with the roasted bones – infused with herbs and roasted onion shells – is poured over the dumplings from a teapot at the table. Wanky? Fancy? Ok, teapots with consommé may get the locals curling upper lips muttering ‘gravy, we used to call it gravy’, ‘it’s that trendy London ‘broth’ isn’t it?’, ‘stock, it’s f***ing stock’….and here they may have just cause. But is it a great dish? Yes, it bloomin’ is. £10.

Suckling pig to share during lunch with a friend on a Saturday inspires an ‘oh my god’  from Adam – rare from this mate – which is welcome, as I was under pressure, having bigged the place up. We tackle shoulder, ears, tail, meat falling away from the bone at the merest nudge, the skin beautifully rendered and lip smackingly good, and…the money shot – a couple of nuggets of yielding, flavour jammed, suckling pig jowl. The pigs are broken down whole on site, cuts cooked separately with varying methods/temperatures, salted with an aromatic confit salt before cooking. It pisses all over the suckling pig I have a few days later elsewhere – not a patch on this belter.

‘Does this mean they are discontinuing the Steak and Kidney Pudding Club? If so this is a disaster as I’ve just assembled together a party of 10 old friends to travel down for a night to partake of this.’ – TitAdvisor

Roast Sika venison haunch from Chart Farm – a blushing crimson slice – is tricked out with the addition of a crisp roll of feuilles de brick pastry, filled with braised shoulder, diced bone marrow and confit shallot – a ‘fancy’ spring roll? Dammit yes, call it a fancy spring roll if you like. I fancied it, big time. £18.

A focused, concise wine list from Guy, is unintimidating and fairly priced – beginning with Berry Bros. & Rudd  £20 own label white and red – with plenty of value towards the top end. We pile in to a bottle of Ridge Cabernet Sauvignon on one visit, as well as one of the top dry Rieslings of the moment, from Klaus-Peter Keller in Rheinhessen. ‘3 Ball Zinfandel’  is a discovery from small importer Nekter, a blend of three Californian counties made by a chap known out there as ‘Zinbitch’.  True story.

‘They’ve got this all wrong. Sadly, the decor and new price structure will deter many people, especially locals (like us). It wasn’t broke, so why fix it?’ – TitAdvisor

Sausage rolls at the bar are made with Gloucester Old Spot and cooked to order, moist little two bite jobs flecked with onion seeds. Plum ketchup can do one, though, right into the River Stour. Anything but Heinz is always a towering disappointment. A gaggle of CAMRA real ale enthusiasts walk in on one occasion like a parade of elephants, a tight bearded formation, nose to tail, murmuring approvingly that ‘TT is on tap’ (Timothy Taylor ale). We chat to a couple who have been coming here every Saturday for over twenty years….they were unsure how they would feel about the  changes under new ownership….they like what they have seen so far. Local love. Whatever next?

Stour valley mallard at the first lunch, skin burnished to gleaming chestnut, comes first alongside parsnip and pickled pear, then as a second serving on skewers, chunks of breast and its crisp, fat laden skin –  essentially Kentish duck kebabs. On another, an exemplary honey tart with an infernal ‘wobble’ just on the point of set, teasing, not collapsing, but joshing that it might. Some serious skills in the kitchen.

There are now, a few weeks on, some glowing comments on TripAdvisor (ok, maybe they aren’t all Loony Tunes…just a fair chunk of them), and if some of the 381 who live here have been perturbed by the changes to this fine old pub, they are entitled to tell this London tosser to sod off back home on the train to King’s Cross. Sometimes pub revamps do veer into navel gazing pretension, jettisoning most of the bits that make a pub great. It does happen. This isn’t one of them.

The Fordwich Arms has whacked itself straight into the top tier of my favourite country boozers. In the smallest town, this is a big new player in the pub world. Just wish I was a local.