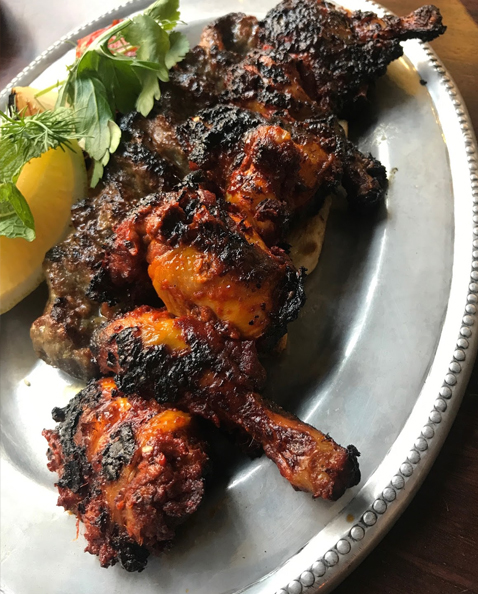 Kabab. Kebab. Kebap. Kabob. Kebob. Whichever of its iterations are eaten/uttered/cooked, it’s all the same family, the same flame licked DNA. Loved and cosseted as part of the national cuisine by a whole diaspora of nations, who really owns it?  Nobody.

According to linguist Sevan Nișanyan, the Turkish word kebap is derived from the Arabic word kabab, with the word kebab  entering the English language in the late 17th century, partly via Urdu, Persian and Turkish. The earliest known Arabic cookbook Kitab al-Tabih, annals of the caliph’s kitchens written by 10th century Baghdadi author Ibn Sayyar al-Warraq, mentions kabab  as cut-up meat either fried in a pan or grilled over a fire. Then there is Ibn Battuta, a Moroccan explorer who travelled the medieval world, who tells us kebabs were served in the royal houses during the Delhi Sultanate period (1206-1526 AD).

Another source points to the possible East Semitic origin of the word from the Aramaic and Akkadian, itself pointing to the prehistoric Proto-Afroasiatic language where to *kab  something is to ‘burn’ or ‘roast’. It becomes clear that no mo’ fo’  owns this supposed ‘cuisine’, nobody has ownership, and so nobody can get offended by supposed ‘cultural appropriation’, a phrase that has become all the rage – or should that be outrage – in the UK food and restaurant world  of late, dontcha know.

The term kebab  has been pulled through the wringer on the London restaurant scene recently: Le Bab; Maison Bab; Bababoom; Fanny’s Kebabs (really? FFS)….on and on it goes. The Daily Mail  shrieked about ‘Posh Kebabs’ *shudder*, and I’ve since uncovered a Posh Kebab Co. – as the son of a Turkish Cypriot mother, all these white boys and girls gussying up our food should be giving me the right pip. But I’m bigger than that, me. Still, the ‘poshing up’ and infantile affectation of calling them ‘babs’ still makes me twitch.

I’ve just about recovered from the German Doner Kebab  travesty, a debacle of a franchise brought over from Dubai, inflicting their horrific doner meat and lahmacuns onto the unwary, shipped over frozen from Germany and cynically served into the gaping maws of the utterly twatted evening crowd. Good lord, that place is grim: the curious can read my thoughts here.

I don’t know much about Iranian food, but I grew up amongst the Turkish grill, and view things through that lens and note the affinities here at Berenjak, from related words on the menu in zeytoon/zeytin (olive) and jigar/ciğer (liver), to the jangling warblings of the music being played – similar tunes, same vibe, different words. Founder/Head Chef Kian Samyani avows that their aim is to evoke a “rustic hole-in-the-wall kabab house from Tehran”, and his Iranian family background and love of his own mum’s cooking gives him – and the tiny 35-cover restaurant – more than a lick of authenticity  that some new ‘kebab’ focused openings simply fail to achieve. The huge mangal dominating the kitchen has all the hiss, rattle and drama of the best open kitchens, plum bar seats in view of the custom made grill.

Hummus at Berenjak  is distinctive, made with black chickpeas and a worthy twist on a staple that is still, more often than not, doled out of the mass catering pack in even the better mangal restaurants….not so this one, nestled in an InstaFriendly™ olive oil, a deep verdant green, tahini content ramped up beyond the norm, a bolshy hummus for mopping up with the excellent fluffy taftoon bread, each one freshly slapped onto the wall of the oven. Smoky aubergine cooked over coals in ‘kashk e bademjoon”  and ‘omelette Irani’  with its namechecked Cacklebean  eggs are stand outs from the various mazeh  preamble picky bits.

But it’s the kababs that will be drawing the devotees here, and after a flurry of meals in the opening two weeks, there’s enough quality going on to inspire return visits.

‘Koobideh kabab’  of minced cabrito goat shoulder has real honk and heft, moist and almost gamey, a couple of ratchets beyond the fragrant fat of lamb.

Another visit for ‘Chenjeh kabab’ of lamb rump chunks, and ‘Jujeh kabab’ of saffron/yoghurt marinated chicken breast to tick off more classic grill options, highlight superior meat and deft marinading, and careful placing of tiny sprigs of herbs on top, with mint, dill, coriander, tarragon and parsley – rather than luzzing it all on one side as an afterthought.

A couple of homely stews punctuate the star dishes coming off the coals, with ‘Khoresht e zereshk’  stew of guinea fowl legs studded with barberries a soothing, softly spoken counterpoint to the grandstanding grilled meats.

The British Kebab Awards set-up in 2013 by Ibrahim Doğuş (on which I’ve been involved as a judge) were a sign, a signal that something was stirring in the UK’s appreciation and re-evaluation of the whole genre, and it feels like there has been a good measure of bandwagon jumping and opportunity grabbing by wily restaurant operators.

The kebab remains an amorphous, seductive concept that is difficult to pin down and claim ownership over, thankfully avoiding the worthy, faux-enraged virtue-signallers who twist themselves into contortions, paroxysms of self-flagellating outrage regarding appropriation  of a food stuff.

My guess is that Berenjak  will be blowing some of the imposters out of the water.