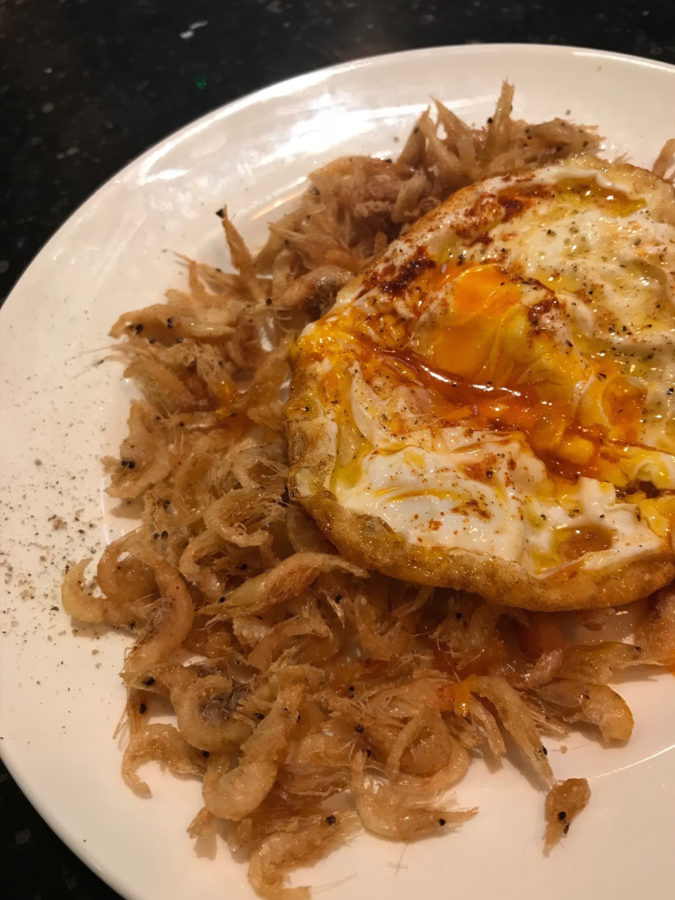 “Is it Spanish? Oh, really? I couldn’t tell because of some of the words. Not heard of Estrella. Is it Champagne?” – Sabor, ‘Mayfair Joe’, February 2018

I wrote this review months ago….well, I could have done. Nieves Barragán is the dynamo chef who drove the brilliance of Fino in the basement of Charlotte Street from the day they opened in 2003, then continued with the first Barrafina in 2007, the game changing Spanish restaurant that had people queueing out the door in Soho when ‘no reservations’ wasn’t really a ‘thing’ in London. These two shining lights in London’s Spanish restaurant pantheon – owned by Sam and Eddie Hart – blitzed much of what had gone before. The roll call went something like this: best croquetas in London; best pan con tomate; best tortilla, oozing its eggy innards; best suckling pig at Fino, its crisp skinned, burnished portions to be snapped up before they ran out; best huge carabineros prawns, a shock of red slapped on the plancha, the heads to be sucked clean…and so it went on.

Memories of a cuttlefish empanada in Soho still reverberate….crab croquetas at the second Barrafina outpost in Adelaide Street somehow improved on the jamón ones….milk fed lamb’s kidneys served on their own mini-grill, a burning coal keeping the happy ensemble warm, sent things off the richter scale; restaurant scenesters went doolally, agog at these new dishes, biting/scratching/hair pulling in the rush to grab a bar seat. The love for Barrafina was strong, unwavering, and shared by many.

So, add Nieves to another Barrafina alumnus in José Etura, who pulled the strings front of house, throw in the commercial nous and financial clout of the Sethi family, restaurant owners and investors under their JKS Restaurants business (Gymkhana, Trishna, Hoppers, Lyle’s, Bubbledogs, Bao, Xu), and the formula veers into view: Barragán + Ettura x Sethis = SMASH HIT. That’s the theory, anyway.

After some snags – end of 2017 having been the original aim for opening – Sabor has opened down the kind of narrow alleyway – hugging Mayfair proper, but it’s Mayfair alright – that is reminiscent of a street somewhere in Andalucia, San Sebastian, Valladolid….they have cheekily added their own ceramic street sign outside on Heddon Street: Calle de Heddon. Will they look to cream it in from the spenny, flashy Mayfair demographic on the doorstep? They’ll need this crowd, that’s my worry. The chat I hear from Mayfair Joe during lunch at the bar confirms the fear of the kind of punters that will swan in. Anyway, with ‘Sabor’  translating as ‘flavour’, the fact that the first thought that comes to mind is Craig David’s ditty What’s Your Flava (2002), is nobody’s problem but mine.

A Charvet cooking range is the kit that gleams in the open kitchen, a swank set up with tableside seating, a small bar area opposite. No reservations, two menus, not many seats around that kitchen (nineteen). Staff bounce around enthusiastically, smattering their menu patter with ‘hey chico’  and ‘ok chica’.  The separate Asador is upstairs: suckling pig cooked Segovian style, and octopus braised in huge copper Galician pots the lure for this third and final part of the set-up.

Sitting at the bar my mind drifts back to La Mejillonera in Vallodolid, a thrillingly humble bar serving mussels by the rustling plateful, and rabas rolls, fried squid stuffed into unfancy white rolls with mayo and a squeeze of lemon juice, alongside tiny cañas of teeth janglingly cold beer chugged by tooth picking Valladollid locals, the vallisoletanostreating this like their own Maccy Ds, paper napkins and picks tossed to the floor as they rack up the beers and soak it up with another squid roll: fast food, Spanish style. José is originally from Valladolid, and it turns out he has directly imported a job lot – 36,000 – of the tracing paper thin napkins that kicked off the reverie of La Mejillonera.

I lose an afternoon here, at the bar, and spend way, way too much. No regrets. Fuelled by Estrella de Galicia beers (many, impeccably cold, dangerously slammable in size) and Spanish vermouth on tap….the bill cartwheels out of control. £100 dropped with irresponsible aplomb. Serious inroads are made into most of the bar menu.

Chicken oyster boccadillo is a smart order, a spicy mayo jiving alongside fried nuggets of chicken in a white roll….Valladolid-esque move. There’s a tweak to the standard patatas bravas, there are fried artichokes with black garlic aïoli (grind of white pepper), there’s ox tongue carpaccio, there are piquillo pepper croquetas with a grating of snow white Zamorano cheese….£100? Yes, I did. Careful now…

On a couple of other occasions, we pitch up at the main kitchen seats, where the drama is. I read a review moaning about eating in front of the hiss and bluster of the kitchen, a ‘nuisance for diners’. Eh? Come on, mate, this is half the fun….it never hurt Barrafina. ‘Arroz con Salmonete’  is a nailed on winner, red mullet on rice with a depth charge of savoury heft, intense, deeply flavoured stock speaking of fish bones, shellfish, prawn heads and who knows what else. Chipirone en su Tinta, squid stuffed with its tentacles and innards, cooked in squid ink, is a highlight. A heroic oxtail dish of Rabo de Toro, cooked until meat eases away from the bone with the slightest nudge of the fork, has a puck of dauphinoise potato alongside.

The kerching kerching of profit margin busters and spreadsheets rears its head on occasion: Queso fresco and black truffle, fresh cheese topped onto cute mini-brioche, are a breezy, cloud-like couple of mouthfuls to kick off with….until you realise they are £9.50…tasting of not very much at all, more texture than flavour. The lure of black truffle will lure the Mayfair Joes in, and they are welcome to it. ‘Frit Mariner’  for £9.50 is by the far the more sensible option, a homely assembly of fried squid, prawns, peppers and aubergine, perfectly seasoned, humming with fresh dill.

Tortilla is Jerusalem artichoke on one occasion, salt cod brandade on another. Someone in our party concerned with getting a portion of their five a day in, orders a broccoli dish from the board at one lunch, and it proves the most underwhelming plate. Tenderstem can do one….even more so for £7.50. A black tomato salad however, with confit artichoke and roundels of Basque Txistorra sausage, is a beauty….only order salads in Spanish restaurants with added sausage, seems a good rule.  Grilled quail is served with chicory and romesco, a healthy grind of white pepper sending it on its way – Nieves loves a flourish of white pepper – and serves us as ‘dessert’, the sweet dodgers at lunch.

The wine which nails it for price/quality each time is the Colgeita  from Toro, a burly snarler at 14.5% ABV that carries it off with some style for £28. Wine nerds will wail that there are no vintages listed, and I wouldn’t mind for the most part, but I might if I’m tossing up whether to spend £62 on a Rioja Muga Selección (£62) or La Mujer Cañón  (£135) from Madrid. The Spanish vermouth on tap is exciting, served with good ice ( an expensive ice machine lurks somewhere). Try Yzaguirre Blanco  for £5 a pop. Smashable.

So, to the pig, the suckler. My abiding memory of Segovian style suckling pig will forever remain as the ones served at my friend Martin’s wedding, to his Spanish wife Ana, at El Yugo de Castilla in Boecillo, near Valladollid. Pigs carried out ceremoniously on trays, skin burnished and crisp from the wood oven, sliced with a flourish with plates. Seating in the Asador  is mostly two communal tables, and I wonder if the downstairs set-up, opposite the kitchen, isn’t a whole lot more fun. I’ll take sitting opposite chefs, to opposite punters I didn’t arrive with – a ‘nuisance’, on occasion – every time. We order a quarter to share (£38), and you’ll probably get the full plate slicing shenanigans if you order a half (£95) or whole (£120). Compared to the suckling pig tried in another recent London opening, Sabor’s version spanked it into next week – beautifully rendered skin and fat.

A portion of polpo á feira cooked in the traditional Galician pots, served in plenty of olive oil, dusted with spicy paprika, is tender, yielding, almost silky.  We see cuttlefish empanada on the board (there it is), lamb cutlets with Arrocina beans, suckling pig ears, morcilla with Txistorra sausage, and fried lamb’s offal. Next time.

A thrilling hybrid of a restaurant, a savvy mongrel that has tweaked the Spanish conventions just a tad, subtle nudges, but they feel significant – smash hit? Probably. Queues out the door? Unquestionably. Was it ever in any doubt? No. Not really. This paragraph was written months ago….

“What’s the percentage of the Estrella beer? Mmmm, very soft. I’m a Pescatarian, you know.”  – Truffles, Mayfair Joe. Go for the truffles….