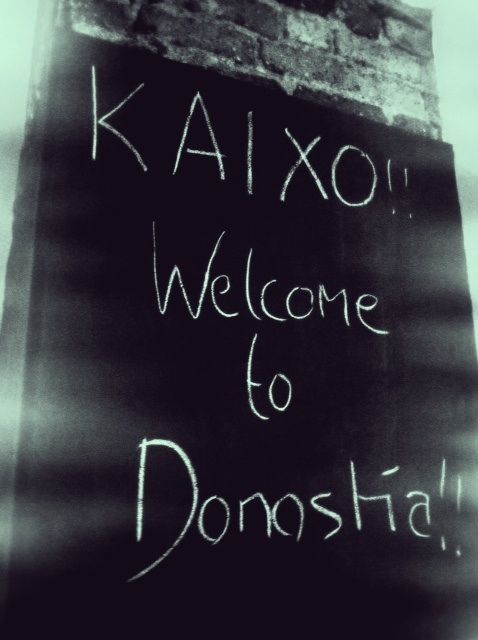 Txakoli, light of my life, fire of my glass. My sin, my soul. Cha-Ko-Lee: the tip of the tongue taking an acid trip of three steps down the palate to tap, at three. TXA. KO. LI.*(props to Vladimir Nabokov)

Bouncing in and out of the many Pintxo bars in San Sebastián fuelled by glass after spritzy glass of the local Basque white wine Txakoli, is intoxicating in several seductive ways. The searing acidity of the wine begins to make your temples ache, piles of ceps heaped sky high on bars make your eyes widen, and the evening cartwheels into a dizzying succession of bars, Pintxos and slivers of sweet fatted Jamón.

Donostia is the Basque form of San Sebastián, the Christian saint and martyr, and this venture is inspired by the fervid nights spent by devout food pilgrims to this corner of Northern Spain, a tiny pin prick of a town that manages to distil some of the best eating on the planet into a ridiculously small area. Fanaticism and obsessive attention to detail oozes from every kitchen, every dark space that has a bar, platters of nigh on perfect food at every turn. Fiercely proud of their food culture, the donostiarrak even twist away from the mothership of Spain and define themselves with their own language and traditions; a tucked away fishing village twenty minutes along the coast is a hot-bed of the separatist group ETA, pictures of its imprisoned plastered on walls. Buildings look like Bavarian mountain retreats, accordions play ‘oompah’ music like a scene from The Sound of Music: here we feel like we exited Spain at the Bay of Biscay.

Set in the area now self-consciously named “Portman Village”, Donostia is owned by wine importer Nemanja Borjanovic and his partner Melody Adams, who have installed former Barrafina Head Chef Tomasz Baranski in the kitchen. Tomasz has worked at Finoand Barrafina alongside their Basque Executive Chef, Nieves Barragán, as well as under José Pizarro at Brindisa. A recent stint in San Sebastián at the modern style A Fuego Negro completed his preparation: those are some serious shapes being thrown on the Basque culinary CV.

The room has a spartan Scandi-chic kinda feel, bang on trend with whitewashed walls and a palpable “the food is the focus” mantra emanating from the walls. It’s the bar that really matters though, eavesdropping on the open kitchen while knocking back £1 glasses of their own Cider imported directly from Basque family producer Bereziartuafrom Gipuzkoa – they love a Z and an X, the Basques.

This is a damn early test-run of this restaurant as they opened quietly two days ahead of their official opening on Wednesday 6th June. The early signs are very promising:

Jamon Ibérico, Cinco Jotas (£18) – From the top grade ’5′ Jotas grade ham, this is the tantalising start to a meal that recalls a thousand Pintxo bars. Nutty meat, sweet fat, lingers for an age on the tongue.

Croquetas with Jamon (£3.50) – Crisp coating, creamy bechamél within, studded with Jamon and seasoned to the point. Barrafina and Fino have nailed the finest croquetas in London for years. These are now up there with them.

Tempura Prawns with Bayonne Ham, Mango (£4.20) – Two bite bombs of flavour. Bayonne is wrapped around prawn then given the tempura treatment – a devious combination of salty, sweet, crisp.

Boquerones (£4.80) – White anchovies marinated in moscatel vinegar, these are the real deal. Room temperature for perfection.

Classic Tortilla (£5) – Oozing in all the right places, this reaches the pin-point brilliance of Barrafina. Job done, tortilla nailed.

Pil-Pil (£12.50)– The classic Basque dish of cod cheeks poached in olive oil, with a devilishly addictive buttery, garlicky liquor that demands chasing round the plate with bread until fully mopped up.

Nemanja imports his own wine as well as using other suppliers, and their opening wine list is concise, with intrigue aplenty – it’s still evolving as they wait for more of their own imports to be added.

Txakoli 2011, Getaria (£22) – Poured from a height by Nemanja as is traditional, this has all the nerve jangling acid you need to kick start a meal. One glass is rarely satisfying, and you really need to nail at least a bottle between friends (or alone, I won’t judge) to begin to appreciate it. A wine which tastes ropey outside of its homeland usually, this is one of the better examples.

Albariño 2011, Castrocelta (£27) – Lusher and riper than many chugging Albariños out there, this is a charming pup that goes like a dream with those tempura prawns. Beautiful balance.

Gran Cerdo 2010, Rioja (£18) – Flying pig on the label is a cracker. This jumps from the glass with a flurry of red fruit, strawberry, raspberry, with only a whisper of oak. Lacy texture. Great fun, great value at £18, the bargain of the list.

Sotorrendo 2010, Jiménez -Landi (£34) – Plush and modern crowd pleaser, lots of fleshy dark Syrah fruit with a pure beam of acidity carrying everything along. Bring this big gun out when you hit the Pluma with romesco.

Another day, another Spanish restaurant? On the face of it, yes. Scratch the surface and the indicators of a quality operation are revealed; Barrafina/Fino CV; wine importers; zero excess flab on the menu; tight wine list. Dishes yet to go on the menu include squid stuffed with chorizo and prawn, and Iberico pork cheeks cooked in red wine. There’s a restraint and confidence going on that augurs well for survival in the blistering white heat of London restaurant openings.

The siren call of Txakoli and friends is the kind of acid trip that’s worth taking.