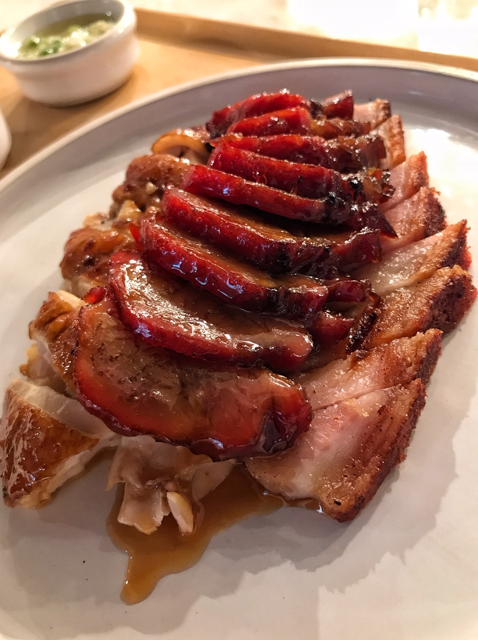 Xian and the City

The first restaurant that saw me ratcheting up visits time and again, like an obsessive groupie, was A. Wong in Victoria. Obsessional, frequent, rat-a-tat visits that clocked way past 20-30 visits in record time – I was hooked, suckered, like a fish with hook in mouth.

Having caught wind of a few whispers towards the end of 2012 of something good happening in Victoria, my ‘new opening’ radar was twitching: the doors were soon blown open by the review from Fay Maschler in the Evening Standard. Next day saw me hammering down the Victoria line. The number of visits soon blurred into one long lunch at the bar.

I slurped soup dumplings, a tricksy ginger infused vinegar held inside scintillatingly diaphanous casings; I hoyed shrimp dumplings into my mush, with a slick of sweet chilli and citrus ‘cloud’ (he managed to pull that off, acceptable ‘foam’); the plumpest pork and prawn siu mai topped with a crackle of pig skin; pot sticker dumplings with a beautiful arty patchwork of crisp lattice ‘skirt’; won ton soup raised up several notches; classic Singapore noodles tweaked in all the right places, a flourish of dried scallop; quail egg croquette, lacy crisp coating popping its oozy yolk on biting; a vermilion scallop puff pastry shaped like an exploding flower, indecently crumbly; spiced cod cheeks; Gong Bao chicken humming with Sichuan heat; crab, seafood and bean curd cannelloni, pickled cockles (eh? Yeah, somehow this worked); fat chicken wings stuffed with prawns on a slick of black bean sauce, good enough to have me howling at the moon – on and on it went, the repeat visits: suckered. I soon wrote about it here.

In an alternate reality, this would have been the place I stumbled across in NYC, coming back to London and gnashing disgruntled teeth, seething with the question: “Why don’t we have something like this is London?” Oh, but we did. So I kept returning, like the most festishistic of fanboys, enjoying it all the more as it seemed most of the slew of London restaurant chasers still seemed to deem Victoria ‘too far a schlep’ for some of the most thrilling, distinctive, maddeningly unique dishes in London – the bar seat at the corner of the kitchen eventually shifted from a number to ‘Zeren’. It still appears to this day, leaving a few friends agog when they receive their bill.

But let’s sling the bias to one side for a moment, and see what the hell is going on here at Kym’s, Andrew Wong’s second restaurant, his first having originally been called Kym’s before he took it over from his parents. There’s something riotously playful about Wong’s approach to food, a gleeful twisting of convention into ever more thrilling iterations. Kym’s however is a different place altogether – backed by serial restaurant investors White Rabbit Fund – with the menu avowing that Wong will be directing his culinary gaze on the “ancient craft of Chinese roasting and nostalgic flavours”, an homage to the many faceted regions of China and “the creativity and craftsmanship of London’s Chinatown” – there’ll be no rabbit and carrot glutinous puffs fashioned into a cutesy little carrot as at A. Wong here, none of the ‘goldfish’ dumplings with foie gras that give us the beady eye in Victoria. More trad, less rad.

Roasted meats take centre-stage, meats gleaming and winking behind the glass-fronted handful of bar seats, the prime spots, offering a view of every chop and slice of the chef. Soy chicken seems ultra burnished, like a perma-tanned member of TOWIE, having been blanched before being slowly poached in a mixture of soy sauce, rock sugar and spices. Pork belly is plunged into the Chinese roasting oven out the back on skewers, the oven now propped up on ceramic tiles as it melted the floor beneath the first time it reached the required 370°C.

There are sweet and sour pork ribs, coated in an oozing slick of sticky sauce, a caramel of red vinegar, sugar and star anise; Xian City ‘Lamb Burger’ of DIY fluffy bao to stuff with shredded lamb, a version of one seen at A. Wong; there’s Sichuan spiced aubergine cooked until its texture is all silk and velvet, a gentle hum of numbing pepper; silken cubes of tofu dredged in garlic soy; Taiwanese ‘chicken chop’, battered flat schnitzel-esque with an ethereal carapace, compellingly crisp shards. Tiger Prawn skewers bristling with studs of crisped rice are fun, though vegetarians appear to get hammered with a £7 King Oyster mushroom version, when the mightiest one is pork with oyster sauce and peanuts, nubbled and charred, far more satisfying for £7.50. I rattle up three visits in opening week…..

The few nods to the dim sum wizardry at Wong’s Michelin starred Victoria restaurant are seen with mushroom buns – fashioned to look like little chestnut mushrooms – and the pork and shrimp ‘Bao Bao’ dumplings, nestled amongst a happy mess of fried egg, crisp chillies and Pat Chun’s sweetened vinegar, arguably the ‘hero’ dish at Kym’s, awaiting a slew of InstAddicted™ food groupies to spaff their pics into the social media ether – this one needs no #filter, no #detail, no #saturation to show its beauty.

A reimagined spring roll comes encased in an almost impossibly fine rice latticework, encasing a fried spring roll of mung bean noodle, shiitake, beansprouts and Wood Ear fungus – a spring roll that has gone to university and come away with a double first. It’s this kind of playfulness and subtle tweaking of a classic, with an obsessional attention to detail, that has made A. Wong the destination it has become, picking up a Michelin star along the way.

A £10 lunch offer looks a sharp decision in this part of town, when City lunchers need to rattle in and rattle out quick sharp – choose a main that could be pork belly, soy chicken, crispy duck, throw in a side of rice or noodles, peg it back to the office to check the latest FTSE movements. The era of long boozy lunches, savagely expensed, are over for now….we’re told. In contrast to A. Wong, the menu here is geared towards being able to cope with volume, and with much of the leg work having been done with assiduous preparation beforehand, an offer based around roasted meats with less variable deliverables seems a shrewd business move. Wong is also keen for Kym’s to be used as a ‘grab and go’, a stop off for grabbing half a soy chicken and rice on the way home. The precise and detailed piecework of intricate dim sum and creative flourishes will continue at A. Wong.

Will the City crowd like it? Dunno, really. I’ll be at the bar seat, number four.