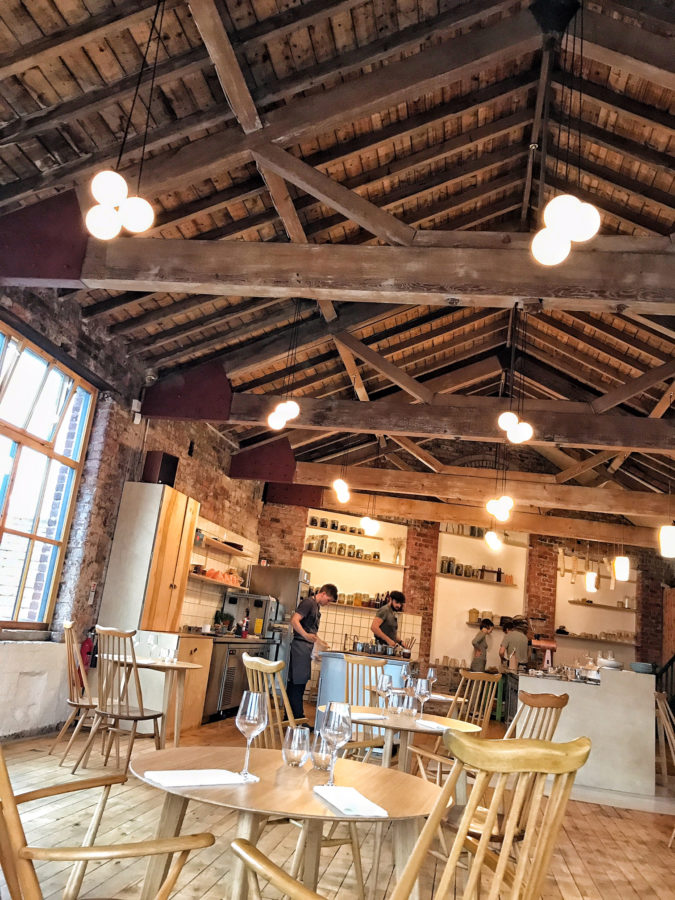 “Where the f***k is everyone?”, I feel like shouting out in the middle of the market place after walking around Stockport’s virtually deserted ‘Old Town’. The procession of grand old buildings either boarded up or with plaintive looking ‘To Let’ and ‘For Sale’ signs begins to look less like a temporary blip with each one I spot, and more like a signifier of recent history: it feels like everyone left years ago.

Friday afternoon, 4pm, and it doesn’t feel like the town is gearing up for a massive bender – getting ready for a quiet night in with a cup of cocoa and the Manchester Evening News is more the vibe. It’s eerie. Figures show Stockport had the highest number of empty shops of any UK High Street in 2012, and in 2014 had only leapfrogged Hartlepool to climb off the bottom rung with 27% of units standing empty – it feels more like 60% today as I’m wandering around, clambering down the steep cobbled narrow lane of Coopers Brow (unspoken history oozing from those ancient cobbles), then ducking up weathered vertiginous steps from the Underbanks to the market place, which sits at the heart of the old town where the castle used to be, and in the shadow of pretty St Mary’s Church.

In 1260, The Earl of Chester, Prince Edward, granted the market charter to Robert de Stokeport allowing him to hold a weekly market, rivalling the markets of Macclesfield and Salford. Known in the following centuries for the cultivation of hemp and rope making, then on to 18th Century silk manufacturing, through to the cotton factories and hat making industry: there’s a palpable sense of what a thrumming town this once had been. Now, there’s melancholy in the air. All the more surprising to find a restaurant housed in the attic of an old Victorian coffee warehouse, displaying serious intent and ambition.

I met Samuel Buckley – a Stockport local – a couple of months previously at Kiln in London, a Thai restaurant I help out with on the wine list front. He was here for the night with a couple of his team, and they were enthusiastically devouring the entire menu and piling into the wines by the glass with gusto. There was a glint in his eyes and a sort of fervour (maniacal, possibly?), with the outlandish declaration that they serve a ‘no menu’ procession of dishes for £65, with wines added for £35. Really? Up there? £100 tasting menu? Immediately I begin plotting a first visit to Stockport. A few weeks later, a stonking review from Marina O’Loughlin in The Guardian comes out…and off to Stockport Central Premier Inn we go.

The approach to the restaurant is a belter, quite unique. Up the steep and narrow incline of Rostron Brow, a Stockport Heritage Trust plaque revealing it was infamous for its ‘ale houses of ill repute’, the most popular being ‘The Dust Hole’ which closed in 1896 – it’s more than a bit forbidding: “Turn back now, don’t go in, it’s ‘Saw!’”, a mate quips to me over a text. He’s got a point…

Through the door and…..lordy. One cavernous room, timbered ceiling, and ‘dining room’ tacked onto an open kitchen that’s so open it’s practically asking you to walk over and keep an eye on the pork as its being seared on the hot plate. Memories turn towards the ground-breaking Loft Project supper clubs that Nuno Mendes ran from 2010 in his Dalston flat. Thankfully, there are individual tables here, not just one communal table: call me a Grinch, but I’ve had it up to the gunnels with the forced bonhomie of smiles and polite ‘and how about you?’ niceties of the communal single table. It can work brilliantly, at times, if the chemistry of diners hits the sweet spot, but when it’s the only option…nah, table for two/three/four/one mate, always a winner.

Crisps. I love crisps. First bite with the welcome drinks on the sofa by the wood burning stove? Crisps. A deviant, infernally brilliant twist on the Salt ‘n’ Shake with tins of dried powders of beetroot; lava; scallop; mushroom – I end up dabbing each one in turn on my wrist, licking it off like some poncy caviar tester. Scallop and lava win, duly given a good shaking in the stripy sweet shop bag: am sending the recipe to Gary Lineker et al for the next Walkers ‘Do Us A Flavour’ campaign.

To the bar seats, overlooking the kitchen. A first bite comes out, savoy cabbage wrapped around crab meat, charry kiss of fire on the outside, slicked with pig fat and given a final flourish of kombu powder – it’s a briny, umami laden smack in the chops.

Cod’s roe, whipped into a rich emulsion (fiendishly, addictively rich)– posh taramaslata is all the rage these days it seems – comes with a radish and carrot, slicked with quince vinegar for added perkiness, helping to cut through that roe. Fab.

Cured trout is formed into a quenelle in front of us and placed in whey broth, balls of cucumber bobbing amongst herb oil….I chase a sprinkle of dried trout round the plate with a licked finger. Texture of the fish is quite something, a slyly silky mouthful. Yep, this is good. Looks beautiful, too.

Salt baked beetroot comes out and I offer an inward ‘oh FFS’, I’m not in the mood for bloody beetroot, where’s the sodding….and oh, oh my, this is, this is rather good, and mmm how tender, and oh crunch of hazelnuts, and ahhh salty shards of something, and a swoosh and sweetish splurt of beetroot hiding under the tender beets, and there’s subtle acid lifting things in there somewhere, and ooof these bitter/sour sorrel leaves, and what the hell are those spiky little numbers (yarrow), and yeah and yeah, and I’ve admitted defeat, wrong wrong, I was wrong, that was good. Ok punks, what’s next?

Cornish hake, eh? A slab of it, pearlescent, brushed with hawthorn oil,…is it cooked, is it cooked? Very slowly, we’re told, but not the cursed sous-vide, Sam hates sous-vide. The star? This was not the star. The star and gob-smacking combination was the puck of carrot and peach alongside…turns out they’re very good mates indeed, and this jiving against another puck of salty lovage and nettle. Carrot and peach: WTF? I dunno, but this unexpected marriage smashed it out of the attic.

A ‘broth’ (stock?) of pork next, elderflower left in there to infuse for a minute – ‘don’t eat the elderflower’, they implore – and yes, I obey, and it’s a meat tea interlude. Middlewhite pork shoulder next, starkly presented with a couple of young leeks, with their spindly rooty gubbins left intact. The healthy ribbon of fat connected to rosy cheeked and tender, delicately seasoned pork, was perhaps screaming out for a bit more rendering – no problems with chomping fat, but the fork hovered a bit over the last wobbling cubes.

Peach dessert came in two acts, the first with tender flesh (salted moves going on too) and ice-cream made with peach kernel, making it zing with a good impression of almond/marzipan, then Act II with the dehydrated skin in the mix: 50 (or 3) Shades of Peach.  Then a little caramelised whey mini-tart and a Buckfast pastille that pops in the mouth unexpectedly, releasing its boozy caffeine hit. Fun.

Wines are poured, like the menu: no list, nothing written down, bottles appear, glasses are filled. Restaurant manager Emma Underwood slickly works the room, pouring and telling the stories behind the wines. I do like and appreciate the whole ‘no choice, no demurring, get what you’re given’ shtick, I really do. Choices create dissonance, so to be relieved of them delivers its own particular joy. However, I do also get a bit twitchy when a glass is empty, with no means within reach to get back in the saddle, short of a garçon finger click – sometimes you just wanna get stuck in to a bottle, y’know? When you’re hoovering their juice almost too quickly to be enjoyed with the dish it’s supposed to accompany, you can look a bit coarse, a bit needy, even with a little top-up. Or just look like you have a problem. Or maybe it’s just me. I didn’t ask if there was a list (I presumed not), and it was never mentioned, but I’m sure they could crank up their average spend by keeping the piss-heads (me) suitably furnished with the weapons to stop the twitches. I would have spent a lot more, that’s for sure.

A burly Tempranillo called ‘Pampaneo’ (great); a Loire Sauvignon Blanc (odd, a bit scary, unbalanced); the wonderful nectar from Piemonte, Cerruti’s, ‘Sol’ from wizened and shrivelled grapes (brilliant, a star wine I’ve loved before), served with the cheese – plenty to intrigue, lots to engage with, if potentially alienating for some. Fabio Bortolomei’s ‘Alba’ comes with its own didactic credo emblazoned on the back, detailing what he did to make the wine and what he didn’t do: it tumbles from the bottle in murky orange slosh, unfiltered, utterly unmucked about with…fascinating. I know a certain Observer critic who would flip his top and go nuts at a wine so defiantly ‘natural’ and with no room to manoeuvre out: as Mr. T memorably intoned in Rocky III, ‘I pity the fool’ pouring weirdy beardy orange wine into his glass.

£1.8 million is set to be invested in the Underbanks at the heart of the ‘Old Town’, with the aim to transform the high street, a report this year outlined. I spot a hoarding on some derelict land on the way back to the station: Platinum: Meet The Future. Flats from £99,000. Changes are afoot. The nascent stirrings of regeneration are palpable, and a bit of poking aroud town yielded a discovery on my overnight stay, a fantastic independent coffee shop The Hatters Coffee, housed in one of those formerly derelict and forlorn grand old buildings, opened two weeks ago and run by a young couple, homemade cakes pristinely displayed. A sign of what’s to come…

There’s a sense of playfulness going on at Where The Light Gets In, an ease of delivery and insouciance that takes it away from the chin stroking, stultifying atmosphere that may have suffused the place had it landed in Manchester, or London. A café and grocer shop, a gin parlour in the basmement: part of the plan for the rest of the building – the intent is to make this a food and drink hub for Stockport. I’ve already booked in another visit.

So, where the f**k was everyone on that Friday night? I have no idea, Manchester most likely. They would do well to get their arses back home and visit a restaurant that is a gleaming beacon for the town, and represents the first stirrings of how bright and how fiercely Stockport’s light may burn in the future.

Where The Light Gets In
7 Rostron Brow Stockport SK1 1JY
wtlgi.co