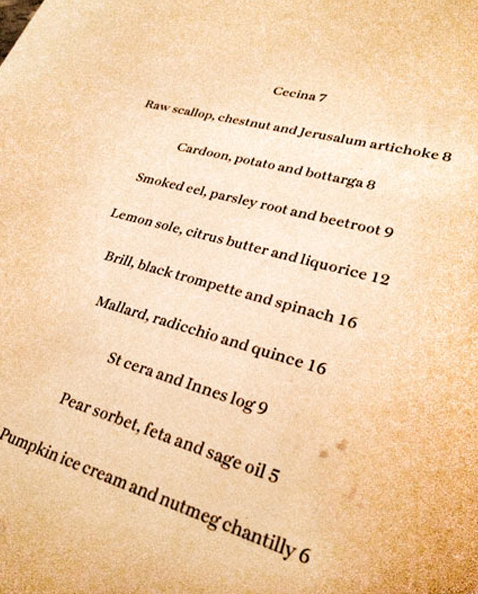 London Fields was just a book title for me, for years: just a book title. A bloody great novel. The coruscating prose of Amis hooked me in, and it was, for a while, love. It probably still is.

Then London Fields became a stop that I hurtled past on the way to and from Liverpool Street, a forlorn looking station with a bit of blurred green in the distance and then it was gone, just before Bethnal Green appeared into view – every time clutching the thought ‘just like the book’.

Now look at the state of it. London Fields, that is. Fresh from hosting the thrilling Thai residency of Andy Oliver’s Som Saa, there’s plenty going on around here, a short spit from the Grand Union Canal. There’s the arrival of Lardo’s development kitchen Lonzo, Patty & Bun, Il Cudega, Leo Carreira installed at Climpson’s Arch, and a host of ever improving openings on Broadway Market, including one of the most gorgeous butchers in town at Hill and Szrok. London Fields is finally living up to its rather shouty name: ‘Hey London, check us out, we have London in our name….we must be more London than, well, London’.

The film version starring Cara Delevinge, Johnny Depp, Amber Heard and Billy Bob Thornton was primed and set to become a cult classic, but has collapsed amid lawsuits, cash shortages and ongoing acrimony, with a September 18th release date which has come and gone. All we had was a short clip on londonfieldsmovie.com which has now, inexplicably, also disappeared. Ah, London Fields, you could have been a contender.

There was much wailing and gnashing of teeth when Mayfields closed its doors in Hackney, a restaurant that began racking up the glowing reviews and then just didn’t stop, with chef Matthew Young at the helm. This time he lands with his own gig in London Fields, on the ground floor of Netil House, partnering with co-owner and sommelier Jack Lewens whose extensive experience saw him spend several years at the venerable The River Café, as well as plenty of time spent visiting vineyards and wineries around the world.

We know we’re in very safe hands with a wine list under Jack’s aegis, but still end up throwing comedy ‘double-take’ glances on a first visit, at the two Champagnes by the glass: Pascal Agrapart’s 1er Cru ‘Les 7 Cru’ NV, and Marguet’s 1er Cru ‘Blanc de Noirs’ Extra Brut NV. Both at £10 a glass. £10? You’ll pay a hell of a lot more for these elsewhere, and those ‘elsewhere’ places are likely to be starchy linen-clothed Michelin star venues. This sets the stall out from the kick-off, places a marker in the sand. A sparkling list says a lot about a restaurant, and this one firstly says ‘drink me’, and then instils confidence that the rest of the list will be very well chosen indeed. Furthermore, it’s an indication of the ambition of the restaurant as a whole. These chaps aren’t here to ‘f**k spiders’, as an old Kiwi colleague once cryptically uttered about an establishment. You get the drift…

CELERY SALAD, POTATO, BOTTARGA (£7) – Goodness, not just any old potato. Ratte potato (not cheap) throwing down nutty, creamy, supercharged potato moves. Is this how potatoes used to taste in the 1950s? Probably. Twang of sweet celery, hit of salty scattering of bottarga. Is this pared down assembly the Emperors new Clothes? Are these boys having a giggle? No, it’s a simple marriage that somehow works in an ineffable way. Pass us the Muscadet, this sh*t is good.

CALÇOT ONION, GOAT’S CURD, TROUT ROE – This was on the set menu but I liked the sound of it, so asked for it anyway. Enjoyed the saline pop of vivid orange trout roe against creamy goat’s curd and crunch of buckwheat. Chopped cornichons seemed to be gilding the lily a tad, the roe providing enough savour and tang.

LEMON SOLE, CITRUS BUTTER, LIQUORICE – A dish which was lauded at Mayfields has made the trip to London Fields, and it’s a real gem, alright. Sliced daikon covers the sole in a fish scale-esque carapace, and breaking through reveals a sparky buttery sauce, bright and clean. Fab.

BRILL, BLACK TROMPETTE, SPINACH (£16) – My notes say ‘f**k me, buttery brill’, so I must have liked it. Deftly cooked piece of pearly white brill. A smear of parsley purée, a bitter kick of spinach for some sweet/bitter interplay, and the funk of trompette mushroom in the background. Great dish.

MALLARD, RADICCHIO, QUINCE (£16) – Hunk of wild Scottish mallard has the heft to cope with a bold radicchio/quince combo, another dish playing off sweet and bitter against each other to great effect.

CHICKEN, CHICORY, ANCHOVY – Another requested dish from the set menu. Turns out to be a fantastic decision. A bit of leg and a bit of breast, the most flavoursome I’ve had all year. Damn, even the breast was jammed with great savour, the skin crisped like a beauty. Herb fed rare-breed chickens from Yorkshire, apparently. Bloody tasty chicken.

The wine list? It’s a pearler, no doubt. Drag yourself away from the Champagne (I’ve tried, it’s hard to) and you’ll pile straight in to plenty more of real interest. Good Muscadet from Domaine de Bellevue; regal Chenin Blanc from Nicolas Reau; a serious mature Meursault ‘En le Barre’ 2007 from Antoine Jobard. A soaring highlight on one visit was the cherry scented purity of Jean-Paul Brun’s Beaujolais ‘L’Ancien’ 2014, strutting with all the grace and perfume of a Burgundian Pinot Noir: weight and fruit, precision, a red fruited, strawberry/raspberry stashed banger. Other reds of note include the high toned Mencia from Adega Algueira in Ribeira Sacra, Galicia and a Burgundy ‘daddy’ and former Mayor of Volnay, Michel Lafarge’s 1er Cru Beaune-Grèves from the ripe 2003 vintage. It’s an erudite, charming wine list that demands repeated forays.

There’s an unerring focus and clarity to the dishes, combinations often riffing on clever marriages of bitter/sweet, richness being cut through with sharpness and citrus. There’s balance here. No stodge. Food stripped back to its rippling abs. Taut. Portions are larger than they were at Mayfields, for sure, and with that we may banish the heinous phrase ‘sharing plates’ to the four winds, for it is lame, tired, and oh so 2010. I wouldn’t want to share any of these plates, and would only do so under duress, or if we order the entire menu…which is a teeny little thing anyway. Order a dish. Eat it yourself. Order another. Isn’t that how things used to be?

Great Champagne by the glass as good as any you’ll find in London, uplifting and carefully judged food coming out of the kitchen – the film may have collapsed, but Ellory has added another reason to begin loving London Fields.