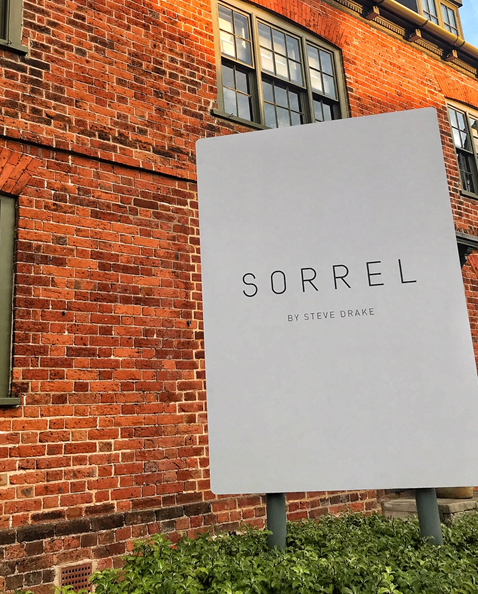 Dorking Deepdene: No One Can Hear You Scream

‘Dorking Deepdene? Does this place even exist? I’m scared.’

So we missed the train from Dorking. The last train that night, pulling away from the station as we came clattering down the station stairs in a deranged sprint from the cab – missed by five seconds. Five bloody seconds.

I blame the taxi driver, who took fifteen minutes to arrive. I blame us for not booking it earlier. That taxi arrives seconds earlier, we make the train – the bare facts. Last train from Dorking station gone at 11pm. Surrey is now HELL. Options? The final FINAL one back to Blackfriars in an hour…from Dorking Deepdene. Eh? Where The Actual F**k? A short walk away from the main station, where we are stranded. Ok, phew.

Deepdene platform is empty. Unstaffed. No ticket machines. Ghost station. It feels like the start of a schlock horror film, with us playing the unwitting – and doomed – characters:

‘This station isn’t real. It’s been hastily erected to fool us. A trap.’,  quips Ben. We laugh, jolly japes flying, what larks. Or maybe, just maybe, we have stepped into an infernal wormhole….the laughing stops.

I first encountered Steve Drake’s cooking at Drake’s in Ripley, Surrey, a short hop away. A former Roux Scholarship winner, with time spent in the kitchens of Chez Nico, Pied à Terre, Aubergine and L’Arpege in Paris, he held a Michelin star at Drake’s for fourteen years – before parting from wife and business partner Serina – with Sorrel being his newest project since opening The Anchor pub, also in Ripley. Sorrel’s Head Chef Richard Giles is in the kitchen alongside him, for the opening of a restaurant that was always going to come out swinging with some ambitious punches.

The building on Dorking’s South Street is a real looker – a three hundred year old Grade II listed building and former school, set prominently at the end the street. It must be the finest building in Dorking. South Street also seems to have the highest concentration of Chinese restaurants and takeaways on the planet, all within a short walk of each other: a mental note is made to come back to check out New Dorking Cantonese; The Peking; Chifan; New Yicken….there is possibly an absolute pearler amongst a long list. Next time.

The Domesday Book of 1086 lists the town as the Manor of Dorchinges, held by William the Conqueror, and it picks up references in the works of Dickens, Oscar Wilde and Daniel Defoe, while composer Ralph Vaughan Williams lived here for most of his life, Laurence Olivier was born here, and Benjamin Disraeli wrote a novel in the now demolished Deepdene House – ah, so Deepdene does exist.

On a first visit we’re struck by the beauty of the building, the warmth of the welcome from restaurant manager Winnie Eckhart and team – the timbered low ceilinged room providing instant charm, like walking into your poshest and most well off mate’s country pad – and a spanking shiny new open kitchen within view of the dining room.

Opening gambit: outrageously good butter. It leads to the question, ‘where the hell does this come from? We learn it’s from the Butter Vikings, whose gentle and slow churning of cream on the Isle of Wight produces this sunburst yellow – shockingly, eye wideneningly yellow – nectar, intense and almost cheesy, a ‘more bread please’ kind of butter; leaving any on the plate would be both rude and silly.

It was the Vikings who introduced the knowledge of refining cream into butter to France, the Butter Vikings tell us on their website, by the warrior leader Rollo, the first ruler of Normandy. Rollo was the great-great-great-grandfather of William the Conqueror ( former ‘Big Dog’ of the Manor of Dorchinges) – blimey, and that humdinger of a historical nugget was revealed by tasting some outstanding butter in a restaurant in Surrey. This restaurant lark isn’t just about scarfing and necking, dontcha know; but usually it is. On to the scarfing….

First bites include a crisp sliver of filo brushed with rosemary butter, spiked with black onion seeds, topped with a sliver of pristine raw Brixham mackerel with a blob of lovage mayo. Almost preternaturally thin filo, fragile pastry that seems to defy the laws of form and structure, is a scintillating start….a weightless wraith of pastry: skills.

A standout dish is Turbot with mussels in Gewürztraminer wine, smooshes of broccoli, grilled lettuce and ‘turbot head sauce’,  the flourish of a strip of dashi jelly draped over the top a measure of the moves in the kitchen – subtle touches, serious cooking. Just as good – perhaps even better – on a second visit at lunch.

Duck from Etherley Farm from up the road in Ockley, in the Surrey Hills, is a sumptuous piece of breast – the texture ravishing – skin lacquered and gleaming from its slick of date glaze, a kick of the spices of a Moroccan Souk from mushroom ‘cous cous’ with almond nubs. Throw in the crisped nugget of thigh on the side, with an accompanying meringue filled with its liver and Moroccan spices, whipped into ravishing lightness, and this is a dish worthy of a quietly muttered f**k me….someone probably heard. Didn’t care.

Venison tartare is tricked out with a slick of bitter orange underneath – whole oranges boiled in a pickling syrup, puréed whole – dried watercress, gherkins, puffed rice and smoked egg yolk. A deft take on tartare, gentle nudges pushing the theme, without veering into deconstructed wankery.

Bosworth Ash goat’s cheese with salt baked beetroot is a tricksy, number, featuring beets of pickled white, mandolined paper thin, alongside earthy firm yellow, compressed cubes of apple, a Douglas Fir mayo made with its oil, scatter of sesame seeds, and a drizzle of beetroot syrup, all elements jiving alongside a mousse of the cheese: delivers a kapow combo of salt/acid/crunch/earthiness, that somehow isn’t out of kilter. Balance is the word that keeps pinging.

A tartlet of Barkham Blue cheese with rosewater gel and tarragon, a one bite morsel with a subtle haunting back note of the east, a memory of proper Turkish Delight. A bizarre looking combination of ingredients on paper, somehow transmogrified into another wicked interplay of salty/sweet and herbal/floral twang: kitchen moves.

Desserts are exemplified by grace and lightness, no clodhopping smack around the chops with richness or whizzbang chocolate pyrotechnics, no sledgehammers of sugar rush: grapefruit curd with peanut, basil and coconut is a zippy palate wakener, while a hibiscus ice sees zingy little bursts of hibiscus ice perking up a delicate cinnamon mousse, a whisper of Pedro Ximenez syrup a quiet player in the background.

Sommelier Sazan Alija breezes assuredly through the room, offering advice on the characterful, engaging list that offers great value and quality with a few unexpected flourishes – Moroccan rosé from Domaine de la Zouina ends up being a fine foil for the duck with its North African scents (£7.50 a glass), while the charms of Oregon’s Sokol Blosser’s ‘Evolution’, a white blend of Chardonnay, Pinot Gris and a jumble of other unrevealed white grapes, is a nailed on winner at £43 a bottle.

“We’ve eaten very well, haven’t we?”, I hear from a table on a lunch visit, the meal almost incidental as they rattled on about cost efficiencies, Return On Investment, Key Performance Indicators, and EBITDA. Dorking was named the top commuter town in 2016 – I can feel the contented warmth of wealth in the room.

There’s a lightness of touch running through the menus at Sorrel, which chimes with Steve’s credo stated prominently on the website: ‘A great dish is about feel, and touch, and timing’ – if this kind of chef spiel sounds cocky, with a whisper of navel gazing, the chat has to be backed up. Yep, job done here.

Sorrel will pick up a Michelin star, it’s nailed on – if you’re interested in that kind of thing – and despite the current vogue amongst the food cognoscenti to sneer and put the boot into the awards (yes, the UK Twitter account is run by a loon, a car crash litany of gaffs and off kilter opining), but it’s an accolade that restaurateurs value and one that helps the business in spades. He’s lost some weight too, the roly poly Michelin character, with a subtle brand ‘refresh’ – laid off the foie gras, or something.

Now, where the hell is that taxi…?

00.12. Dorking Deepdene station is spooky. No other bugger here. We’ve been waiting over an hour. Ben is convinced the station is indeed an elaborate ruse to ensare us, knocked up in the last hour by a nefarious horde of demon foot soldiers:

‘There aren’t even any seats on the platform. Not one. Look at this hastily laid floor, it’s cheap tarpaulin. The crafty bastards. I’m not falling for it…’ – Then a light in the distance….the 00.19 looms into view. Ghost train or not, we’re getting on it…next one’s at 05.26. Sod that.

We get to Blackfriars, 02.14, with a helpful thirty minutes wait at Redhill for the connection. Ben hops on a night bus, I grab an Uber on 1.5x surge pricing, and curse the Surrey cab driver, curse us for not planning it, and curse the £30 receipt I find in the inbox the next day. Eventually I calm down. It was all worth it.

I’m still convinced Dorking Deepdene station doesn’t exist; a phantom station to catch the unwary who don’t sort their taxi bookings out, those foolish ones. Lunch at Sorrel, however, was a breeze…

There’s danger lying in wait, going to Dorking for dinner. There is also some ruddy good cooking going on.