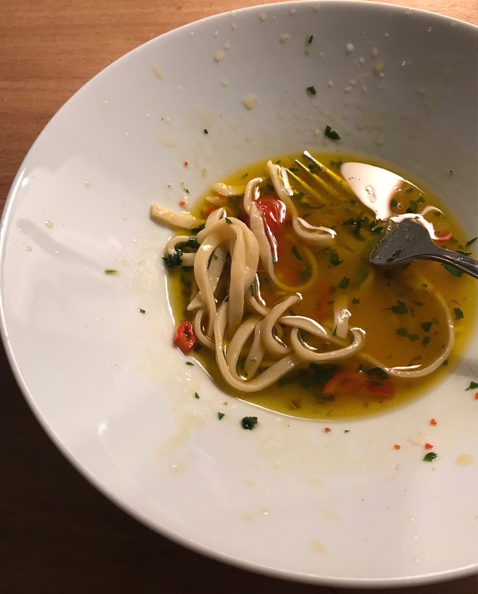 “Down to Margate, you can keep the Costa Brava, I’m telling ya mate I’d rather have a day down Margate with all me family.” – Chas and Dave, Margate (1982)

Margate was never on my radar. Family seaside jaunts focused instead on Southend and its addictive strip of amusement arcades, when the thought of sitting in an Out Run machine (SEGA), the model car complete with real (gasp) steering wheel, gear stick, and foot pedals, was enough to send an eleven-year-old into raptures: collective 1986 minds were blown.

So, it’s catching wind of a nascent food business that first gets me legging it to Margate in July 2017. Tipped off by Richard, a mate who lives in Whitstable and with whom I’ve scoped out some of the Kent coastal towns – Broadstairs, Herne Bay, Rochester, Deal, Folkestone – I head straight for The Old Kent Market, an indoor market where Bottega Caruso first pitched up, a tiny set-up selling their own fresh pasta alongside produce from Campania, championing in particular the tomato sugos and passatas made by Simona’s family in her hometown of Foglianise in Benevento Province, close to Naples. A small kitchen at the back saw Harry Ryder and Simona Di Dio knock out a couple of pasta dishes for lunch on the couple of days a week they were open, to be eaten outside the shop in the covered market, perched at whichever spot could be found – I was charmed from the start.

Having met while Harry was managing restaurants for Peyton and Byrne – Simona arriving in London to take up an internship at the Italian Embassy – their shared love of cooking led them to move to Margate with their young son, and start a successful Kickstarter funding drive in February 2017 for the opening of their first permanent spot in December last year. The building they’ve pitched up in is a real looker, nestled in the prettier Old Town part of Margate, originally an early 19th Century pub, The Crown; remnants of wallpaper from the pub are framed beside the door, faded glory.

From the first lunch, the first few mouthfuls of verdura e fagioli – an unassuming assembly of greens, beans and hunks of bread in limpid broth, a dish whose essence is cibo povero (‘food of the poor’) – it starts to become clear: this is a little ripsnorter of a place. Simona’s grandmother handed her the recipe, and the cosseting feeling as we mop up the remains, is like a culinary letter straight from nonna.

‘Ndunderi gnocchi, an Amalfi version made purely with ricotta and cooked with the family’s tomato sauce, are pepped up with smoky scamorza mozzarella – a glorious mess of weightless gnocchi, stringy cheese, and the intense ripe sweetness of tomatoes grown on the rich volcanic soils near Mount Vesuvius.

Tagliatelle with Caruso’s own fresh pasta is dredged with a ragù of pork and beef (60% sausage, 40% beef), a haunting backnote of fennel from sausages made by Nino at Worgan’s Butchers in The Goods Shed, Canterbury. It’s at this point that I get the heebie jeebies – the ragù brings back memories of the towering version at Zucca, the lauded Italian in London’s Bermondsey Street run by chef Sam Harris, much lamented after it’s closure in 2015. Zucca-on-Sea is the thought that pings….

On another visit the pasta is served as Tagliatelle alla Genovese, a Neapolitan recipe from the 1700s (cooked for Genovan sailors), and comes snarling out the traps with a good aged honk from a blend of beef shin and steak, wobbly cuts of pork belly in the mix with a slug of Falanghina wine in there during cooking, slowly cooked onions adding a memorable sweetenss. Burly, robust, winter warmer.

Flour for their pasta is from the Cooperativa Lentamente, who took over abandoned farm land in Campania and began planting ancient grain varieties native to the region in 2013: organically grown, low yielding and ground in an old Neapolitan stone mill near Benevento, they are the antidote to the agricultural leviathan of Monsanto.

A soup with lentils and sausage – Zuppa di lenticchie e salsiccia – looks like nowt much on paper, but oooft and woahh  why the hell are these lentils packed with so much earthy depth? Asking the question, Simona tells me their pulses are from La Rufesa, an organic farm in Montefalcone di Val Fortore, in the commune of Sannio where she was born. The heft of sausage – again from Nuno at Worgan’s – adds a coarse textured, muscular punch to the soothing hum of lentils. Cracking cooking, quietly confident.

I pitch up again on a Friday, the second occasion they open for an evening service (currently just Friday night), and am utterly seduced. Dimly lit, the happy murmur of diners ticking along in the background, Dancing Queen lilting from the speakers, Simona and Harry dashing in and out of the kitchen, segueing between pot-stirring and front of house with effusive energy….it feels like we’ve turned up at somebody’s home; it almost doesn’t even feel like a restaurant….in all the best ways.

Linguine con colatura di alici is the barnstormer this time, the star move of colatura di alici anchovy essence made in the Amalfi village of Cetara, an Italianate version of fish sauce. The last forkfuls of pasta leave behind a heavy slick of olive oil, garlic, lemon juice, parsley and the umami whack of anchovy, which scream out to be mopped up to the last with bread: they duly are.

A stew of squid, landed that morning in Broadstairs from the day boats of Jason Llewellyn’s Fruits de Mer, is served with chickpeas from Foglianise (notable depth of earthy flavour in the pulses, yet again) and Crown Prince squash from Windmill Community Gardens, a Margate market garden project growing organic produce: like the soup, more voodoo going on. Is this nonna power? I’m guessing the answer is certo.

Vermilion hued jars of tomato sugo and passata (ravishing rows of red on the shelves) made by the family in Foglianise, are available to buy – the one I take back made with pomodorini del piennolo, granted PDO status for the clutch of communes around Mount Vesuvius, takes a pasta dish I cook the next day (their tagliatelle) firmly into the “f**k me, I’m a great cook” territory – that wonderful sweet ripeness of the tomatoes doing all the work, and for one night only, I was shit hot at this cooking lark.

Attention to detail abounds: a short, smart list of wines (good importers) tops out at £32, with a silky Aglianico ‘Fidelis’ from Cantina del Taburno in Foglianise a highlight; Lauretana mineral water – classy stuff from Piemonte – it’s piercing tiny bubbles a palate cleansing surprise; a list of Italian craft beers including Birrificio and Hibu from Lombardy; earthernware crockery from Foglianise; superb tomatoes from Kent’s Thanet Earth; cream, milk and yoghurt from Hinxden Farm Dairy: alongside the family’s produce and small players from Campania, Kent gets first dibs for supply.

The most recent visit sees me lunching with Bocca di Lupo’s Jacob Kenedy, a chef and restaurant owner whose knowledge and experience of Campania outstrips mine by a gazillion squared. I later ask him what he thought; maybe I’ve gushed too much, too early, heart on sleeve stylee?

“A touchingly intimate and heartwarming place. Without doubt the most authentic and homely Campanian food I’ve had anywhere outside the region.” Ok, that’ll do.

“You can keep the Costa Brava and all that palaver, going no farther, me I’d rather, have me a day down Margate with all me family.” – Chas and Dave, Margate (1982)