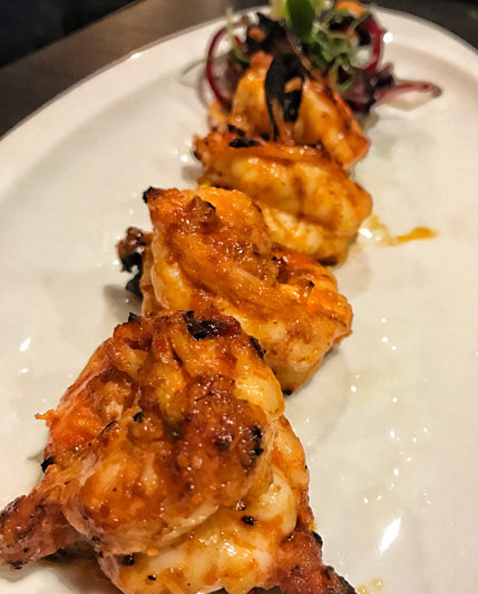 The Meghna Grill in South Woodford. Sunday. Some time in the 80s. A sprawling buffet, a pile of massive rustling onion bhajis. The eight-year-old me doesn’t know much about this kind of exotic scarfing, but he knows what he likes. Onion bhajis, yeah, those football sized (to me) fried things, are a right touch. Can I have another one, please?

An introduction to anything resembling food from the Indian subcontinent, The Meghna Grill ‘all you can eat’ Sunday buffet was the only time we went out for an ‘Indian’, coming home with a large bag of leftovers after our over enthusiastic bhaji raiding. There was always at least one bhaji coming back with us. Opened in 1972 by the Bangladesh High Commissioner, Mazir Uddin’s family run restaurant closed in 2013 when he retired, and a restaurant I grew up with was suddenly no more.

The site was taken over by one of the most disastrous and doomed openings I can remember witnessing. The Dove & Olive Branch stuttered along for a couple of years, tumbleweed blowing through the room every time I walked past, the ‘Modern European Menu’ reading like a hapless chef’s memories of eating out in the 1970s: ‘chorizo risotto’; ‘pan seared chicken breast’; ‘herb and egg coated chicken supreme; ‘olives for two’ – the death knell was imminent when ‘pulled pork pasta’ made an appearance, the poor owner’s desperate final flailings to try and get in with the cool kids and their damned pulled pork trends.

Now what’s this in its place? A top Indian? Woodford? A short walk from my gaff? Go do one, mate. Not possible, not likely, it’ll never happen. Grand Trunk Road promises ‘A gastronomic journey from Kabul to Kolkata’. Hmmm. Not convinced, not hopeful. Hang on, the owners are Rajesh Suri, ex-Tamarind manager who oversaw a first Michelin star for them in Mayfair, and his former Head Chef Dayashankar Sharma. Eh? I know Woodford is having a ‘moment’ with some decent openings in our environs, but what are they doing pitching up here? Turns out Rajesh has lived in South Woodford with his wife Sonia for thirty years. Ah, that’d be it then.

I’m sceptical when I read in the local paper that they’ve received over a hundred reservations before they’ve even opened, and later read “we’re fully booked for the next three weeks”. How I chortled, taking this to be optimistic braggadocio, the Michelin men puffing out chests and giving it the big ‘I am’, cockerel strutting to entice the Essex Boys and the TOWIE crowd, the footballers and the City traders, who live all around the money laden yellow brick road that leads all the way to Epping and beyond: nouveau riche, Marlene, is all the rage round these parts.

A Friday night first attempt to book (just in case the rumours are true) gets a “sorry Sir, we’re fully booked this evening”. Still refusing to believe all this no room at the inn nonsense, we stick our head in at 7pm for a walk-in chance. Still no dice. Lordy, it smells good in there, everything keenly snapping our curry synapses. Bollocks.

The following Tuesday I manage to squeeze in, solo, but the place is still not taking bookings that night. Sometimes the ‘Billy No Mates’ approach to walk-ins has its perks. No, I won’t be long, and yes, you can have the table back swiftly.

Things don’t start well. The limpest gin and tonic known to humanity arrives, zero fizz, sparking off recurring tonic rage. Probably bloody Fever Tree again, I mutter to myself, the source of most of my ire at a depressing number of virtually flat G&Ts poured these days. Turns out it’s Schweppes, from an already open bottle. I send it back, and now they only have Slimline. Oh FFS. Poor ice, melting away instantly, doesn’t help. Tonic and ice rage. There’s only one restaurant I know that pours the perfect tonic serve: Schweppes, in cans, for maximum nose prickle and perky fizz: Sophie’s Steakhouse, I love you for this. A starter of Kekde ti Kikki ‘crab meat cakes’ with lemongrass and curry leaves, feel a bit joyless and don’t excite, three little dense pucks of brown laid out in a twee line, topped with a tangle of salad garnish. The mood darkens.

The atmosphere is flipped on its head when the Lucknow ki Nihari comes out. Lamb shank on the bone, dredged in a wickedly earthy, murky sauce that gently hums with warm spice, rich and glossy yet with an invigorating seam of acidity adding freshness and bounce; chunks of lamb, still pink at the core, fall away from the bone at the merest prod of fork. Sauce is chased round the plate with wonderful, and extremely light, pillowy naan, and exemplary fluffy pilau rice. The next memory is of gnawing the bone for scraps of meat. Hang on, we have a winner.

A second visit specifically for lamb dum biryani. Saturday lunch and it’s sedate, easy stroll in, no booking. Yes. Another banger. Coming out encased in its pastry ‘parda’, cut open at the table and releasing steamy plumes, scented with heady spices, green cardamom scuds here and there, jammed with hunks of tender lamb (shank, I’m guessing), sticky, sweet, caramelised onions hugging the bottom of the pot, begging to be scraped off, mixed with more of that rice, and devoured. The Dum Biryani has been hogging the limelight of late at places like Gymkhana, DUM Biryani House, and Jamavar, and this has to be up there with the best of them. 15 minutes walk from home suits me just fine…

Another meal reveals a tandoor prawn ‘moment’. Kolkota Kii Ajwani king prawns are a revelation, huge plump buggers, sweet and ravishingly juicy, carrying the charry kiss of the tandoor, a haunting of anise and thyme scented carom seed, and a compelling sauce/marinade that sees me crunching into the tail and licking the remnants: we order another round immediately, buzzing on tandoor prawn. I’m with Ben Milne on this visit, co-owner of the excellent Italian grill up the road in Wanstead, Bombetta, just to check my judgement isn’t being swayed by local loyalty – he’s agog at those prawns too, and the instigator of the second order. Good man, Ben, it was the right move.

Alongside, an excellent, gutsy, boldly sauced Punjabi Murgh Masala, chicken thighs in a ginger, garlic, onion and tomato masala that proves to be a worthy ‘scooper upper’ with naan bread until the last scraps. Peshawari ki lamb chops with fennel, star anise and raw papaya are given the tandoor treatment, neatly trimmed, offering a fat puck of lamb, yielding, moist, hectically spiced in the best way – gnawed clean. Delhi Ka Chilli Pudina Murgh, a soothing curry of chicken thighs, has a hop of mint and coriander in the mix.

I’m not a fan of the dumb-bell weighted beer goblets, which make each sip of Cobra feel like a Sisyphean test of strength, and perhaps the room is more function over style and mood (lighting in the evening a bit shrill), but this is ultimate nitpicking: a grateful Woodford are already lapping it up…and so am I, after rattling up three visits. Raj floats across the room like a calming, benevolent uncle, chatting to each table with the ease of someone who has done the hard yards, now enjoying doing it in a suburb he knows well.

Woodford and surrounds continues to delight and surprise with this latest opening, and the arrival of a ruddy good Indian is a fine addition. The eight-year-old me would approve – bjajis or no bhajis.