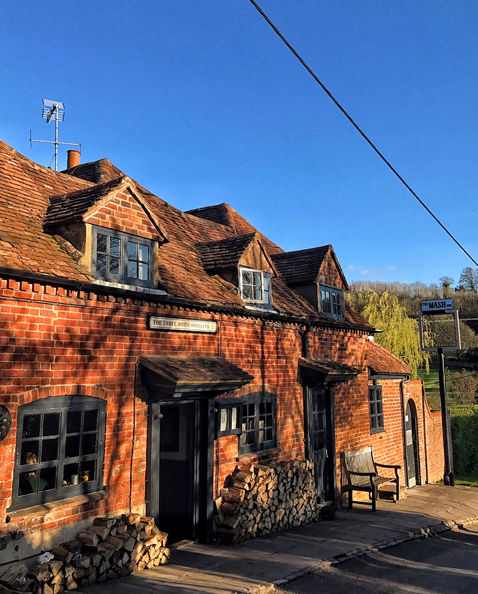 So, I hear of a place called The Mash Inn, owned by a chap called Nick Mash. First thoughts veer towards “wow, why name what was formerly known as The Three Horseshoes after yourself – bit cocky that, isn’t it?”

Turns out that Nick is part of the family who now run Mash Purveyors, suppliers of fruit and vegetables to top hotels and restaurants, and with a history of farming in the area stretching back 150 years. He has also run successful food-led pubs in London. Ok mate, I’ll let you off…

This 18th Century pub sits in an almost impossibly idyllic setting, atop the crest of a hill that sweeps down into the Buckinghamshire hamlet of Bennet End, near Radnage. We’re in posh country pad territory: rock singer Jethro Tull used to live a short walk away at the eight bedroom, tennis court and stables bedecked, multi-million pound ‘Pophleys’ (once coveted by a house hunting Tony Blair), a 16th Century farm now inhabited by the co-creator of Teenage Mutant Ninja Turtles – Cowabunga.

The Platonic ideal of a pub continues on opening the door (18th century teeny size) and walking into the ‘bar’: a tiny flagstone-paved room with an ancient low-slung ceiling that would make a hobbit throw a cartoon double-take, checking if they needed to stoop to get to the two-seater bar. Snug.

The smell of wood smoke is the first thing that pricks up the senses, coming from the bespoke wood and charcoal-fired grill in a kitchen which goes beyond the term ‘open kitchen’ to mean ‘a corner of the dining room’: the dining tables segue seamlessly into the fire and pans rattling in the corner, no barrier between diners and chefs. Being nosy and chatting to the chefs as they cook is encouraged, which is handy, as Head Chef Jon Parry is a fizzing ball of cheffy enthusiasm.

Previously Head Chef at The Bull and Last pub in Highgate (winning an Observer Food Monthly award for them in 2011), Jon went on to work at Adam Byatt’s Michelin starred Trinity in Clapham. It’s his procession of Instagram snaps that draw me in: Etxebarri-esque wood grill; baby chickens brined in whey, dangling and smoked over the fire; cured Mangalitza back fat lardo draped on toast with scotch bonnets; fat Côte de Boeuf grilling with calçots; lamb heart stuffed with confit shallot; iridesecent cut-through of rosy hued rolled suckling pig; Jerusalem artichokes cooked in embers with hay mayonnaise; homemade burrata with pickled mirabelles; grey mullet roe being made into bottarga – the pork belly doughnut was the tipping point. Off to Bennett End….

The jaunt out of London turns out to be shockingly rapid: a no-nonsense train from Marlylebone that rattles through West Ruislip, Beaconsfield, High Wycombe and shunts passengers out at Princes Risborough after thirty-nine minutes on the fast train. Fifteen minutes in a cab and bucolic Bennett End appears.

Greeted by manager Kiloran (an excellent waitress I first met at Kitty Fisher’s in Mayfair), I quickly fire in to a couple of pints of from local Marlow brewery ‘Rebellion’ – I’m staying the night in one of five bedrooms upstairs, and am in the mood for some pre-dinner oiling, emboldened by knowing I’ll be slinking upstairs at the end of the evening. ‘Going home’ is not on the menu. There may have been a few gin and tonics before dinner. Working up a hunger and all that.

Is it odd that I didn’t sit down for dinner? That I stood for three hours at the wooden table that serves as the pass for the kitchen, chatting to Jon as the procession of food from both the ‘tasting’ blackboard (£55 for the whole shebang) and main menu (I’m freewheeling from both, because I’m worth it, because there’s lots that intrigues). Strange that I was offered a seat/table but was happy to stand there? Best possible spot…

The theatre of the grill, the hiss and spit as smoked Blythburgh pork belly hits the bars, and brill on the bone, and that rib of beef that ends of nuzzling up against a rustling pile of duck fat chips that keep winking at me….all of this captivates, enthralls, and I realise within seconds that I have the best seat (stand) in the house. There may have been more gin and tonics.

Mangalitsa lardo and padron peppers come on roundels of toast charred on the grill, a swirl of chive oil anointing these devilish first bites: I’m sold, I’m in, I’m not moving. Another gin?

Jon is an inveterate pickler/grower/curer/forager, obsessed with process and playfully finding ways to incorporate it all on a menu that shifts and changes each week with a jitterbugging, whirling dervish-like intensity, a protean menu that teases and frolics. Picking gorse flowers to make syrup is one of a host of current projects on the go. There’s a Muntjac deer pelt slung over a fence out the back where Jon is trialling making some leather. Beer brewing is on the horizon…

One day he’s drying damsons outside for damson umeboshi, another day sees him malting barley, and here he is smoking some pineapple over gorse, when he’s not guerrilla foraging for juniper, wild garlic and spring morels, or tending the pea shoots and rhubarb in one of the fourteen raised beds in the garden.

Beds. The one I slump into that night is a pearler; king-size Hypnos bed; deep roll top bath; L:A Bruket Swedish toiletries; smart pastel blue Roberts radio; view of the garden and its willow and ponds – breakfast comes with a rat-a-tat on the door, a tray with a freshly baked warm croissant, house granola and jams, and a bottle of reviving turmeric ginger beer. No cooked breakfast shenanigans here.

I return for a Sunday lunch with a wine trade crowd, and we luck out with a beautiful sunshine-drenched day, drinks in the garden, and a cracking roast rib of beef (roast potatoes have perfect crunch and fluff, Yorkshires are huge and defiantly rich and eggy), although it’s the smoked poussins (dangled from 9am over that grill, gently smoked) served with bread sauce that steal the show.

Nick and the team take my persistent gentle chastising of their choice of tonic with good humour – Fever Tree, the tonic with the limpest fizz known to G&Ts – the prime culprit in virtually flat gin and tonics every-sodding-where I go – gets the sharp end of my tongue each time. It doesn’t stop me wading through them, mind. Anyway, there’s a rumour there may be cans of Schweppes waiting for the next visit. Hoorah.

So I go back. Four days later. The ease and speed of the journey from London makes it stupidly easy to dash there for dinner and get back home: reverse commuters have never had it so good.

I assume the position (standing, always standing) at the grill/pass/chef’s table. This time it’s beef crackling (chewy crackers made from the tendons), beefy, gummy little pups with a sprinkling of mushroom salt; wild garlic soup with cow’s curd; a side of those duck fat chips (why so flavoursome? Picasso variety from up the road, I’m told); cold smoked salmon (over willow and hay) with turmeric Romanesco; slices of goat lomo that do a great Bresaola-alike impression, serious meaty heft. Sous chef Ben Melchior gives me an enthusiastic detailing of how they make their smoked mash. A crew are here from Tom Kerridge’s The Hand and Flowers and The Coach, as well as a chef from Thai restaurant Kiln – go where the chefs eat, is usually  decent advice.

I hope the well-heeled locals appreciate what Nick has created here, and the untrammelled enthusiasm of Jon and his team in the kitchen. The Three Horseshoeswas in danger of being turned into a house before the Mash scion swooped and saved the day, ensuring it became listed as an “asset of community value” and must always remain a pub. Having opened towards the end of 2016, it’s still in the early stages of a long-term vision. It’s worthy of plenty more thirty-nine minutes of train time.

If the only negative I can muster about The Mash Inn is that the tonic doesn’t meet my harsh criteria of carbonation levels, well….I’ll take that.

Tonic rage is worth a pork belly stuffed doughnut.