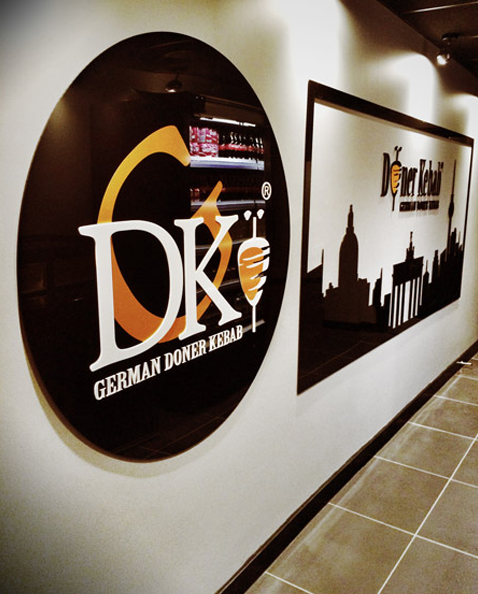 Döner: from the Turkish ‘dönmek’ (to turn)

‘German Doner Kebab’. Say what? Spotting the sign for GDK (with an off kilter ‘G’ haunting the background) while walking along Islington’s Upper Street elicits, in this order: a cartoon style neck whiplashing double-take; a public, barely disguised chuckle; a slow-burn recollection that Germany has a massive Turkish community (the largest in Western Europe); a thought that this is guaranteed to be shit, quickly followed by another that this may actually be genius; genuine disappointment that having emerged from lunch at Moro less than ten minutes before, there was no way I could tackle a kebab as dessert at 4pm – another day, another time, with a hunger. Walk on by…

A quick bit of digging for info reveals the surprise that this is the fifth UK outpost of a global franchise with a Dubai head office, its first site opening in Berlin in 1989, already operating in Sweden, Dubai, Pakistan, Kuwait, UAE, Oman…and it goes on, with more planned for India, Nigeria, Qatar, Canada… 34 outlets in 10 countries, and more planned for the UK. They clearly aren’t here to f**k spiders, as a friend once memorably and cryptically intoned. No spiders here, no messing around, this is a slick global franchise roll-out.

The half-Turk in me has been quietly admiring the way Turkish cuisine has had a perky skip in its step for the last couple of years, encompassing good wodges of cookbooks and magazine supplements, TV cookery shows, and finally kicking in to the London restaurant openings, the most significant being Babaji Pide and Oklava, as well as the Turkish influence glowing bright at Chifafa Kebabs, Arabica Bar and Kitchen, Berber & Q, Le Bab (“posh” and “gourmet”, no less), and the ‘chicken kebab’ at Michelin starred The Clove Club. Kebab and friends are now much coveted. Time to dust off my Fez.

The first detail that hits home walking into this primarily takeaway venue, is the bold branding. ‘Get your branding out for the lads’, it shrieks: trademarked and ®’d all over the shop, a ‘Quality in Everything We Serve’ strapline, logo beaming out next to a cartoonish swirl of a spinning döner spit. Food comes out in shiny, gaudy branded boxes, which seems like a wanton waste of packaging for something that will be luzzed in the bin within seconds. Euro Pop hisses insistently from the speakers.

There’s some confusion with a website that says their “unique fusion concept uses only 100% veal, lamb and pure chicken fillets”, yet asking for lamb leads to being told this is a lamb free zone, there is no lamb in the building, and never will be, only beef. What about the veal? “We only serve beef and chicken”. I thought you served veal? “The beef is the veal”. Ok, gotcha. He didn’t really seem to know either. Menu says beef, website says veal.

LAHMACUN (£2.99) – Steamedmacun is what has been created, a sad, floppy, wan bit of dough with the sparsest of meat toppings. Undercooked, tasting mostly of bitter dry herbs that were decanted who knows when. Joyless, flaccid wretch of a Lahmacun. A bit of a piss take. Have they been to Green Lanes, where lahmacuns come rustling out of the ovens (the best are wood burning), piled high and packed with plenty of spiced lamb? It turns out they haven’t ventured further than pressing ‘GO’ on the EPOS system: I later find out these are frozen, brought in from Germany. Lahmacun is having a ‘moment’ in London, but this one won’t be part of the conversation. No love here, and I’d need to be so pissed that I can’t focus, to enjoy this version. The short trot up the road to Black Axe Mangal gives a glimpse of how do to it, an Englishman who is pumping out offal flatbreads that have taken the idea of lahmacun and somehow improved it. Avoid this if you really value the £2.99 in your pocket. 50p extra for salad is the final slap in the face. Sod that.

DONER KEBAB SANDWICH (£5.49) – Pocket of bread that has been toasted in a kind of waffle press. Garlic sauce, chilli sauce, already added. No need for the “garlic, chilli sos, boss?” exchange, which is a shame: the time honoured ritual speak of the ‘dirty kebab’. I try a mix of beef and chicken (shaved from the spit with something looking like hair clippers) on a first visit. Dry, lamely seasoned chicken, sweaty, stinky beef (or should that be veal?). The bread is the best bit here, with a little toasted crunch, better than many a soggy pita sopping with tomato, collapsing, jettisoning salad everywhere, and is a clever little twist: eminently Instagrammable. Branded bread, in both senses of the word. That’s cute. A second visit for fairness, we try just beef (veal?). Nope, not convinced.

DURUM DONER SANDWICH (£5.99) – The Durum wrap is the one I order most in Turkish restaurants, albeit with the lavash bread wrapped around my favoured bit of meat coming off the mangal, the Adana kebab, a skewer of minced and spiced lamb which sums up the essence of what good ‘kebabery’ is all about. There’s nothing the lavash can do to rescue the meat here. Give me the waffle bread, if you must.

Branding of a ‘Dirty Kebab’ is what seems to be going on here (despite a spurious spiel stating that they are a “healthy alternative” to the traditional image of Doner Kebabs” and a “nutritionally sound gourmet food experience”), and there’s no shame in that – in fact, it’s something of a master stroke. The branding is the clever bit, and scaleability on a global franchise model. The UK roll call stands at Birmingham, Ealing, Ilford, Southall, with Fulham Broadway opening soon. Legitimised, stamped, the kebab as brand. All the meat comes from their suppliers in Germany; brand consistency, they’re all over it. CEO Farshad Abbaszadeh grew up in Germany “munching on kebabs after a tiring football training session”, and 2014 saw him triple the number of locations in the United Arab Emirates. You can’t argue with stats like that.

Hodja Nasreddin in Stoke Newington had the honour of being the UK’s first kebab shop and restaurant in 1966 (closed many years ago), a favourite family spot I was first taken to at six months old (true story), and a short stagger away from GDK on Essex Road stood Sultan Ahmet (also now closed), another regular haunt of ours in the 80s: I find myself pining for both of these on the way home. They survived for many years at a time when the last thing on their agenda was how to ‘package’ their Turkish offering; keeping the coals on the mangal burning and making sure the Iskender Kebab tomato sauce was spicy enough on the döner meat, the more pressing concerns.

If I return to German Doner Kebab it will be when I’m
utterly hooned at 3.30am and find myself staggering along Upper Street in a booze addled stupor (It’s a 4am close, Fri-Sat) – that’s not an endorsement.