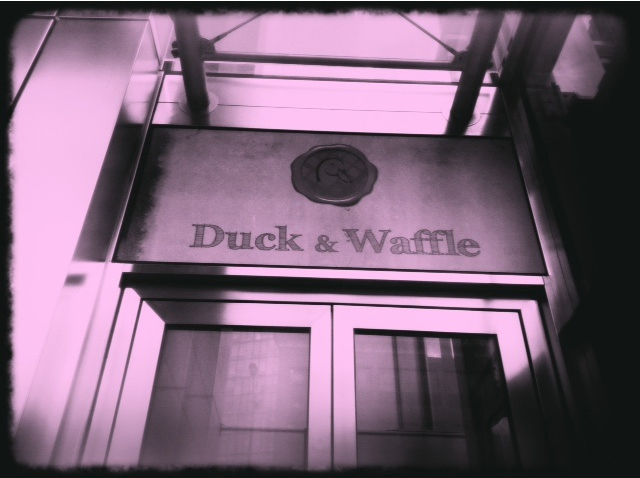 At the top of the Heron Tower on Bishopsgate on the vertiginous 40th floor, a new narrative of London dining has begun; its success or otherwise relies on enough bodies being shuttled up the ear popping, stomach fluttering lift between the Dead Zone of 2-6am, a time when we should all be tucked up in bed and re-charging. If the brave 24-hour dining side of the Duck and Waffle concept is to succeed, going at it full tilt seven days a week from the kick-off, there will need to be some serious love for the place from London’s vampire diners.

London has never looked so glorious with the views up here, particularly at night where the lights appear to tremble in the far distance. The word “wow” will probably be uttered more than any other when people first arrive.

The responsibility to make this more than just a default late night eating venue falls on Daniel Doherty, a young chef who shone under Herbert Berger at 1 Lombard Street,and more recently set up the The Old Brewery kitchen for the Meantime Brewery in Greenwich. His Twitter profile is telling: “Play with my food, and eat with my fingers” – the playfulness of the menu is the first thing to strike home.

The sharp wine list put together by top Head Sommelier Patrick Frawley, previously at The Lanesborough Hotel, is a chiselled beauty; tight, zero flab, to the point. The flip side is that there isn’t a whole lot under £40. It’s punishing. The wonderful Kung Fu Riesling from Columbia Valley in the USA, made by maverick winemaker Charles Smith(he toured with rock bands before making wine), is priced at £40 a bottle, a £14-ish wine in a retail shop. Order by the glass and watch this leap to the equivalent of £51 a bottle. Ouch. Serves you right, you by-the-glass lightweights. So, order a bottle and get on with it. Order the same winemaker’s Velvet Devil Merlot (£45) for an injection of full throttle and flirtatious dark fruit, if you’re in the mood for red – great wines from a quirky chap.

Bibendum are supplying the wines and the list glitters with solid producers, Vietti from Piemonte, Chavy and Grivot from Burgundy, Dönhoff from Germany, Ridge from California, but on the whole are wines I’d like an expense account to really get stuck into. Premier English wine gets a showing with a couple of vintages of Nyetimber, the Sussex sparkler. Take a loaded City Boy/Girl from UBS down the road – you’ll be laughing all the way to their bank.

Cocktails have an element of theatre to them in the glittery bar, highlights being a Manhattan given the mad scientist treatment with a bottle filled with the smoke of burning cinnamon before your eyes, then infusing the drink. A Gin & Tonic is pepped up and served in a flute, a spume of citrussy yuzu squirted on top giving it an echo of the whiff and flavour of mandarin. Bartenders maraud around a central island bar, allowing you to stick your nose in and ask questions; they are switched on and engaging. Restaurant manager Gavin McGowan Madoo is a good guy to know here, a real pro who was most recently at Bar Boulud in Knightsbridge.

After four visits the menu has been given a good seeing to, matron.

Octopus (£11) – Roasted until charred in parts, glistening and sticky, tiny nuggets of chorizo adding a whack of flavour with each bite. Chef says each tentacled leg is massaged Japanese style by a Daikon root to help it reach the desired tenderness. Probably with a ‘happy ending’ and £20 left on the sideboard. Great dish.

Ox Cheek Naan (£5) – A proper fluffy naan filled with smoky meat? Leave the late night kebab on the forlornly spinning Doner spike, and replace with this: smacks it into next week.

Foie Gras ‘All Day Breakfast’ (£12)– Slab of brioche slathered with homemade ‘Nutella’, couple of indecent slabs of pan fried foie, two gum piercingly crisp shards of smoked bacon, topped with a quail’s egg. Looks like a dinky little ‘Mini Me’ breakfast and would make a good t-shirt logo. Distilling the playful nature of Dan’s cooking, this is one to put a smile on your face. Tastes fantastic at 4am.

Duck and Waffle (£13) – Confit duck leg, couple of waffles, mustard maple syrup to drizzle. Yes baby, 4am darling, after a few drinks sweetie: a cocky little charmer. Possibly enjoyed even more at 7am after a boozy night out.

Scallop (£8) – Cute little discs arranged on the latest ‘must have’ restaurant accessory, the Hawaiian pink salt slab, topped with a sliver of apple, squeeze of lime, and the subtle funk of black truffle. Happiness inducing little morsels.

Herdwick Mutton Slider (£5) – Slider’s eh? The new darling of the London restaurant world. A mutton slider must be a first in London, pepped up with smoky harissa and charred tomato jam. Ratio of bun to meat felt a little clunky.

British Seafood Pot Roast (£11) – A little tame with only a whisper of the promised N’duja. A dish with the volume turned down low.

Porchetta di Testa (£5)– So delicate, so subtle, rolled pig’s head sliced wafer thin. I’m left wanting another grind of salt and another squeeze of Amalfi lemon. Gets lost a little in the whizz bang pop of many of the other dishes.

Spicy Ox Cheek Doughnuts have just gone on the menu, and it looks like Dan will constantly be playing around with it, having fun, and sparking life into jaded 4am palates.

The booze license is until 3am, so this won’t be a place to continue on the pish till daybreak; it will be a place of solace and shelter for those stuck in the purgatory between kicking out time and the first tube. People like me. Ambitious and playful food available 24/7 is something I can’t recall having seen in London, so this is something alone that deserves some kudos. I hope it lasts. Owners Sushisamba have their own Japanese/Brazilian/Peruvian gig going on in the floor below, and clearly have the dosh to keep it afloat with other restaurants in New York, Miami, Chicago and Las Vegas.

I see the night through, watch the surreal sight of the shift change of staff as they arrive at 6am, see a spectacular sunrise that gives me goosebumps (it was emotional, man), have a bloody good English Breakfast complete with beans shot through with smoked pig’s trotter, and step out blinking into the sunlight on Bishopsgate.

4am dining now holds no fear. It has been owned. Come and ‘ave a go if you think you’re ‘ard enough. That’s not waffle.