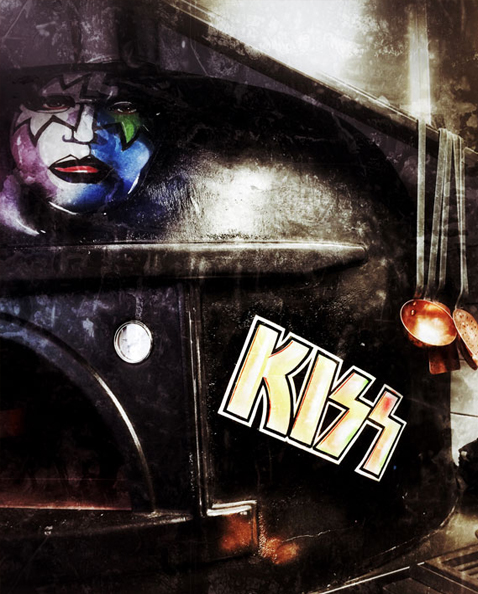 Why now for the love of the mangal? The original primary use of the mangal in Ottoman Turkey was for warmth, with any cooking being done as a secondary function. There are 19th Century accounts of sultans ‘stretching their legs out towards the mangal, to receive the heat up to their middle’ (*1). Now the word refers to both the event and the apparatus itself, a staple bit of kit in most Turkish households that is brought out throughout the year, even when it’s pissing down, often consisting of nothing more than a small metal box on legs, like the one we have at home.

The influence of Turkish style grills — and of Turkish cuisine in particular — have been making a lot more noise in London thanks to a clutch of openings. Berber & Q cite the influence of the grill houses of Istanbul; Arabica Bar and Kitchen grill their Kofte, Turkish chillies and more over charcoal, and make a version of lahmacun; Babaji Pidehave brought the art of pide to central London with their beautiful huge wood oven; The Clove Club’s ‘Chicken Kebab’ is an homage to the kebab, and they have an old school mangal in the kitchen; the iconic Mangal Oçakbasi is set to arrive in Shoreditch; Chifafa Kebabs have poshed up the kebab in Clerkenwell; we await to see what Selin Kiazim will serve at her restaurant Oklava…and so it goes on.

Lee Tiernan and wife/business partner Kate Mullinger Tiernan bring Black Axe Mangalto Islington, after a two month stint cooking outside Copenhagen nightclub Bakken, which the website Vice deemed to be a ‘sort of ode to Turkish barbecue culture’. Having spent over ten years working with the St John group, and plenty of time kicking around in the USA with top chefs including April Bloomfield and Danny Bowien, there’s a firecracking melange of influences that are being busted out on the menu, from St John-esque reverential treatment of all the gnarly, murky bits of the animal, through to asian accented dishes, all seen through a shish shaped Turkish lens — a potent combination.

The spit and crackle of fat dripping onto charcoal, a KISS themed wood oven, sourdough bread made daily, more offal than you can shake a Fez at, and thumping rock. This feels new….

LAMB OFFAL FLATBREAD (£5.50) — Tasting exactly like a turbo-charged Lahmacun, this takes the best elements of this Turkish staple and cranks up the volume with the addition of heart, kidney and liver to the usual minced lamb topping. A sprinkling of zesty sumac, punchy red onions, parsley — fluffy, just baked sourdough has a lightness and bounce, taking the usual thin crisped base into new territory. All the flavours of a good kebab in one riotously enjoyable wrap: lahmacun reimagined and, somehow, improved. Shock.

CENTURY EGG AND ANCHOVY (£3.00) — The classic Chinese preserved egg, introduced to a heap of wickedly salty dried anchovies and a slick of anchovy mayo, a depth-charge of umami and salt. A palate wakener which calls for cold lager: the CISK cans from Malta do the job, not too gassy and gleefully drinkable.

PIG CHEEK, SCALLOP AND CHILLI (£7) — Shards of sweet crisp fat of jowl on gem lettuce, nubs of darker meat in the mix, whack of XO sauce humming with dried scallops and prawns. On another visit this was served as a wrap — either way, pretty euphoric, a must-order.

‘MISSION CHINESE WING SPICE’ LAMB TONGUE LETTUCE CUPS (£8) — Two bite morsels, crisp gem lettuce holding offal which has a texture spookily similar to the classic ‘elephant’s leg’ doner (what is in those anyway? Jammed with offal, that’s what), dusted with spice and a flourish of black sesame seeds. A glimmer of the spirit of Mission Chinese, Danny Bowien’s thrillingly creative restaurant in New York (memories of a visit to the raucous original in the Lower East Side a couple of years ago still reverberate), a cayenne pepper spiked spice mix adding sparks and fiery kick, hopping with cumin: Lee has Danny’s full blessing to use the mix, and there is talk of a possible Mission Chinese ‘take-over’ of Black Axe in the future. That would be one worth schlepping to N7 for.

OX HEART, TOMATO AND LOVAGE (£13) — Another full throttle wrap, tasting for all the world somehow like a good grilled shish kebab (beef stepping in for lamb without missing a beat), little chunks of something that clearly isn’t heart adding some deeply flavoured fat, pulled off the grill and slapped into the mix. Turns out some beef rump cap from the estimable Warren’s Butcher’s of Cornwall has been added this time. Of course it has. Sneaky move.

SWEETCORN AND SMOKED COD’S ROE (£8) — Sweet and salty and smoky and bits between your teeth for days. Sweetcorn lovers rejoice.

BROAD BEAN FALAFEL, CURD AND SQUASH (£8) — Vegetarians should steer clear of the joint, it’s so bloody small they’ll only be cluttering up valuable meat eater’s space, but here’s their main course waiting for them. Good falafel, but if you eat meat you may consider this as taking up valuable space in the appetite locker. They make their own cow’s curd as well as butter.

WELSH RAREBIT (St. John 1993) (£6) — A nod to the chef’s time as Head Chef at St. John Bread and Wine, that airy sourdough is topped with plenty of onions and oozy Montgomery Cheddar. You may struggle to eat much more if you take one of these down on your own.

CABBAGE SALAD AND PRESERVED LEMON (£3.50) — Freshness and zing to counterpoint things after you’ve been bludgeoned with, offal, meat and rounds of flatbreads, nuggets of preserved lemon helping to cut through all that animal goodness and fat. Probably a wise idea.

There’s an energy buzzing about the place, a tiny former Chinese takeaway jammed in between a pub and a coffee shop. The food delivers the visceral snap of the best kebab experiences, accompanied by a rock and roll soundtrack. Queens of the Stone Age and friends are belted out at a healthy volume….’Nicotine, valium, vicodin, marijuana, ecstasy and alcohol….c-c-c-c-cocaine.’ Feel Good Hit Of The Summer (2000)

Twenty-two seats, that’s it. Perching on the ledges at the side and opposite the grill may be the only spots available at times. Stretch your legs out towards the heat of the mangal, eat kebabs, eat offal, tap the toes to KISS.

Those Ottoman Sultans would probably approve.